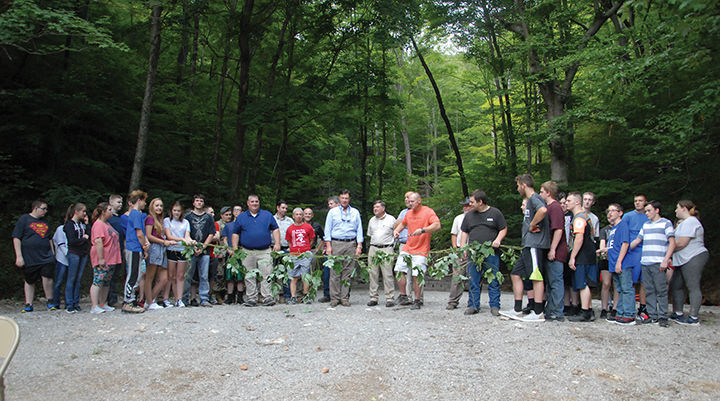 Members of Pathfinders of Perry County, elected officials, JROTC members, volunteers and numerous people who had a part to play in developing the Perry Park Trail System participated in a kudzu ribbon-cutting in August to commemorate the opening of the Perry County Park Trails. 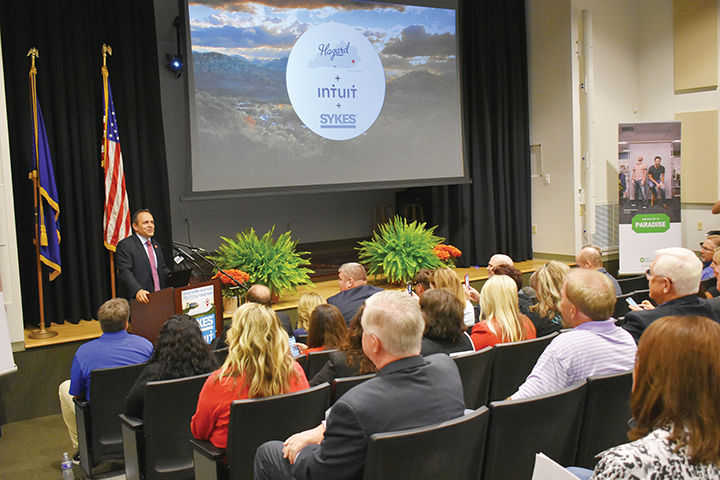 In September, state and local officials gathered to celebrate the announcement of a partnership between the companies of Intuit and SYKES. Then-Gov. Matt Bevin said he believed the partnership truly highlights the efforts throughout the commonwealth to ensure economic success.

2019 has been a busy a momentous year for Hazard and Perry County. The past year was full of memorable events that can be looked back on and remembered as the community moves into the new decade:

Change began early in 2019 for Hazard and Perry County as both the city and county were working toward Sunday alcohol sales. During the Hazard City Commission meeting that was held on Jan. 21, members of the commission took the first steps toward the legal sale of alcoholic beverages on Sundays. The second reading for Sunday alcohol sales within Hazard city limits was held during the next commission meeting in February. The first reading was held during the subsequent meeting, during which the mayor and all commissioners except for Brotherton, who abstained, voted in favor of changing the ordinance to allow Sunday alcohol sales. During the second reading it was presented that the ordinance chance would allow for the sale of distilled spirits, wine and malt beverages inside of retail locations and restaurants with appropriate licensure beginning at 1 p.m. on Sunday until Midnight. The decision to allow sale hours to extend until midnight was due to the fact that holidays such as New Year’s may fall on Sunday.

Although several local businesses and restaurants now offer alcohol on Sunday, the change was not welcomed by all of Hazard’s citizens. Members of the community who attended the commission meetings were invited to speak before the vote was cast. Some spoke against the change, such as Hazard resident and local pastor Karen Campbell. “I think the message that we would send by being for this is that Sunday is no longer sacred,” said Campbell. Another who spoke out in opposition was Terry Joseph, a pastor at the Eleventh Hour Worship Center in Hazard. Joseph also said he was concerned with sales beginning around the same time church ends on Sundays. “If you notice on Sunday that’s usually the biggest crowd in restaurants and our children are gonna be there,” said Joseph. He continued, “Can’t we have one day that we don’t have to worry about taking our families out to one of the local restaurants?” Some other concerns brought up by the opposition was that they believed it would increase crime within the city and some said they would not visit establishments that sold alcohol on Sundays. Not everyone who spoke out did so in opposition, however. “This is not a religious issue, it’s not an issue of faith, it’s an issue of revenue for the city of Hazard and we need the money,” said Hazard resident Bobby Duff.

County alcohol sales soon followed, with the Perry County Fiscal Court holding a special called meeting for the second reading and the adoption of an Alcohol Beverage Control Ordinance on April 22. During the meeting, Judge-Executive Scott Alexander told court and community members that the Sunday sales of alcohol for county businesses will begin at noon, as compared to the city’s 1 o,n,. Additionally, the county businesses have the option to sell alcohol until 2 a.m., as long as they close by 3 a.m., as compared to the city’s midnight cut-off.

Those familiar with the The Appalachian Arts Alliance know that the Art Station in downtown Hazard has been a time-consuming process. However, much of the physical work needed to advance the project was completed in 2019, including the demolition of the outer wall. Downtown Coordinator Appalachian Arts Alliance Board member Bailey Richards, said that they’re glad the community is able to see the work put into the project. “There’s been actual physical stuff going on there since probably the end of May or the beginning of June, but a lot of it has been happening in the back so I’ve had a ton of people come up and say I thought you guys were working on it, I thought you guys were moving forward, I’m not seeing anything,” said Richards, “Everybody noticed that wall coming down and we were really excited for that because we knew that and painting were going to be the big things everyone would see.”

The Appalachian Arts Alliance also offers classes, a program they hope to expand with the Art Station. Director Jake East said, “The arts are powerful for the community and arts education is not just about making pretty things, it’s about embracing creativity, its about really empowering people who want to do other things.” East said the Appalachian Arts Alliance has always been working towards offering arts education classes to the people of Perry County. “Appalachian Arts Alliance was incorporated in 2013, so almost 7 years now, with the idea of having a downtown arts center but also to supplement the schools in the area in their ability to provide arts programming and education,” said East. He also said that once the Appalachian Arts Alliance is able to move into the building they are renovating in downtown Hazard they will be able to expand upon these classes. Plenty of work is still needed to finish the Art Station and those in downtown Hazard will likely see it being done in the New Year.

Another project that spanned much of 2019 and has had a great impact on Perry County was the construction of the Perry Park Trail System, the Healthy Mile and other work done by Pathfinders of Perry County that led to Hazard-Perry County being designated the 20th trail town in Kentucky.

In August, Pathfinders, elected officials, community members and more gathered at the park to celebrate the opening of the Perry Park Trail System, bringing the total number of trails within Perry County to 7. Jenny Williams of Pathfinders said that the potential and want for the project had been discussed for years before development began. “Pathfinders of Perry County started in 2006 and even longer than that we’ve been coming up here and walking on these logging roads and gas roads and saying you know what would be really good is if we had some good trails,” said Williams. She continued, “Then Ben Braman stepped up and now we have good trails.”

How old cell phones are spying on illegal loggers

Ben Braman, of Pathfinders, has spearheaded the construction of both the Healthy Mile walking trail and the Perry Park system hiking trail. Braman said that the completion of the trails was thanks to the work done by local teens. “We had Hazard High School, we had EKU kids, we had kids all the way from Notre Dame, we had so many people I can’t even remember that showed up and spent over 3,000 hours of volunteer service,” said Braman. “Over 3,000 hours of showing up, getting dirty and moving rock.” Braman added that the group had likely moved over 80 tons of rock by hand during this summer alone. Braman also said that the community the kids were a part of had done a lot to help the trail development. “These kids showed up and worked, our local businesses showed up and fed these kids who showed up and worked,” said Braman, “That’s what made this project come together and my favorite part of it is that the kids became so involved which in turn brought the whole community into this project.”

Williams said that the hiking trails are a great and accessible addition to recreation in Perry County. “Hiking is something everybody for the most part can do, it doesn’t cost anything, it’s accessible, and now that it’s right here in town it’s even more accessible,” said Williams. “Our local elected officials have been crucial in making this happen,” said Braman, “This was a 3.2 mile trail grant that we received because of all this help that we received we doubled that,” he said.

The trails in Perry County include the Leatherwood Trail and Moonshine Trail at Buckhorn Lake State Resort Park, the North Fork River kayak trail and the River Arts Greenway in downtown Hazard, the Healthy Mile behind ARH Medical Mall, the Perry Park Trail System and the TransAmerica Bike Route (USBR 76). Guided hikes are done weekly on Wednesdays at 5:30 P.M. at the Perry Park Trail System. For more information about the trails and guided hikes visit the Pathfinders of Perry County on Facebook.

Around the middle of the year, Perry County was hit hard with the murder of a Hazard woman at the Bobby Davis Park. In July, Anthony Ray Lewis, 47, formerly of Yeaddiss, was charged with the murder of Marlena Holland Howard Hurt, 37, of Hazard. According to court documents, Lewis has a criminal history, including first-degree robbery, murder and kidnapping, stemming from December 1992. Additionally, Lewis was out on bond during the time of the murder for his involvement in a Leslie County rape, and his trial for it was scheduled to begin that month. Because Lewis and Hurt were both residents of the Hope House Homeless Shelter, many community members expressed concern about the incident, the homeless population, the Hope House and how Lewis was out on parole and no one in the area seemed to know. A preliminary hearing was held for Lewis in August, and at the time, Commonwealth’s Attorney Scott Blair said that while no final decisions have been made yet, the death penalty is being considered.

Following the incident, volunteers with the Hope House began looking at ways to improve their intake process and be more informed about their residents. In addition to these extra steps, Hazard Mayor Donald “Happy” Mobelini began holding weekly meetings in City Hall to address the situation, the homeless population and start the process of bringing various organizations together to collectively gather resources available for the homeless community. It was during one of these meetings that it was confirmed that the Hope House has officially closed its doors. Since then, the city has created a brochure with resources for the homeless and people in need, including healthcare, clothing, food, employment and more.

In September  following the June announcement of SYKES laying off approximately 179 employees at the Hazard location due to the loss of a prior client, community leaders and elected officials from various levels began working with Intuit to establish an alternative for the operation, resulting in the announcement of a partnership between the the companies of Intuit and SYKES, which is expected to bring a minimum of 300 full-time customer service jobs to Perry County’s Coal Fields Regional Industrial Park.

Another large business announced for the county was the incoming Dajcor manufacturing plant at the  Coalfields Industrial Park. The groundbreaking for the project was held in November, and the company is expected to employ hundreds of workers once up and running. Some positions have already been filled for the company, and more will be hired in the upcoming year.