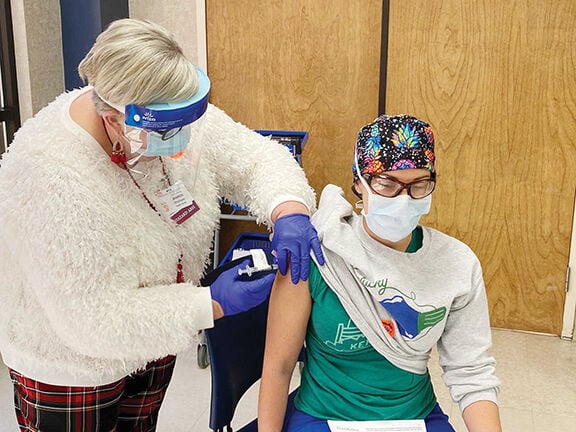 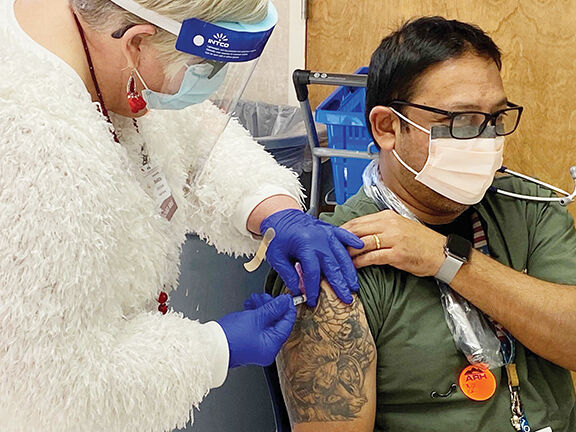 On Dec. 22, the Hazard Appalachian Regional Healthcare (ARH) hospital, along with all other ARH hospitals in the state, began administering the Moderna COVID-19 vaccine to employees and other healthcare workers in the area. This week, beginning on Dec. 28, the Hazard Primary Care Centers of Eastern Kentucky also began vaccinating employees.

ARH Chief Medical Officer Maria Braman said that all ARH hospitals in Kentucky received limited doses of the Moderna vaccine, and these shipments will be used to vaccinate ARH employees as well as other local healthcare officials who have been serving the public during the pandemic.

“ARH, we received in our Kentucky hospitals – all 11 of our Kentucky hospitals — we received, between Tuesday (Dec. 22) and Wednesday (Dec. 23), the Moderna vaccine. We received a total of 6,300 doses between all of the hospitals. Here in Hazard, our Hazard ARH received 3,500 doses,” said Braman. “The doses that we received, in combination across all our 11 hospitals, are not only for our front-line employees, but also so we can reach out and help vaccinate EMTs, first responders, dentists in the community and other doctors, nurses and clinicians who are in the community taking care of patients every day.”

Currently, Braman said, ARH only has the Moderna vaccine, but she said if the state offered shipments of the Pfizer vaccine, they would accept those as well.

“Hazard ARH has available storage for Pfizer vaccine, but has not been offered it,” said Braman. “We are happy to receive any of those.”

Braman said ARH began vaccinations last week, but had to pause them for Christmas Eve and Christmas Day. The vaccinations resumes on Monday, Dec. 28 and are continuing as available. “We started vaccinating (Dec. 22) and we were able to vaccinate hundreds of people (that day) and we continue to do that,” said Braman.

On Dec. 28, the Hazard Primary Care Centers of Eastern Kentucky also began vaccinating employees after ARH provided them with some doses of the Moderna vaccine.

“We received 300 doses for our employees from ARH after Scott (Lockard) at the health department asked if they (ARH) would have some to share,” said Dr John Jones, a doctor at Primary Care.

Jones said that in addition to the Moderna vaccine, Primary Care has also been providing monoclonal antibody transfusions, and has seen positive results with it.

“We have been giving the monoclonal antibody transfusions even on weekends. We’ve had several patients come in ill and after the infusion walk out feeling much better,” said Jones.

For now, Braman said, the vaccines in stock are for healthcare workers, but soon they hope to begin vaccinating other groups in the community.

“From what we understand, the next tier after healthcare workers is a group they refer to as One B. There are a lot of people in One B — that’s going to be anyone over 75, police officers, teachers, maybe folks who work in grocery stores,” said Braman. “That will probably take a couple of months, probably into the spring to complete that One B category, so I imagine by spring time to early summer is when we will really start to be able to reach out to the general public.”

Watch this snowboarder survive an avalanche in Colorado

Many healthcare workers, said Braman, have heard feedback from the community expressing concern about the safety of the vaccines and distrust of the process of vaccinating people. Braman said she understands that with the vaccine being something new that it could be concerning to some, but said she assures the community that the science is there and is based on years of research, and the vaccine is very safe for use.

“It really is very safe, the science is behind it,” said Braman. Some people, she said, may experience some minor side effects much like with the flu vaccine, however, they are not going to get the virus from the vaccine.

“You cannot get the virus from the vaccine, those are side effects of your immune system gearing up and they all last less than 24 hours,” said Braman. When giving the vaccines, she said, they watch for anaphylactic shock reactions, and have patients wait 15 minutes before leaving just to be safe.

The vaccine, said health officials, was not very bad and they would not have taken it if they wouldn’t recommend it to patients.

“It was painless, and was even less painless than my flu shot. I didn’t even have a sore arm,” said Braman.

“So far so good,” said Jones. “Other than some arm soreness and maybe some fatigue the day after, I’ve done fine with it. Everybody’s different.”

Once the vaccine is widely available to the public, Braman said it will be vital for people to take the vaccine to get cases under control.

“If everyone were to take it we would reach this idea of herd immunity very quickly. What that means is that 80 percent of the population is immune to the virus,” said Braman. “With the vaccine we keep people from dying, we get through it more quickly and we can get back to normal.”

Braman said that, although the process of vaccinating people has begun, the community as a whole still needs to practice safety guidelines such as wearing a mask, avoiding mass gatherings, practicing social distancing and washing hands frequently.

“Right now we very much need to continue to practice all of those things to keep each other safe — wear your PPE, social distance, wash hands and sanitize our areas. It is critical, and I know this time of year is when we all want to gather and be with our families and travel, we really need to be very responsible about this,” said Braman, explaining that she knows the holiday season is something people look forward to, but bringing multiple people together is just setting the virus up to be spread even further.

“I really think next summer we can be in a completely different place if everyone continues these good practices and is safe until then,” said Braman. “If everyone takes the vaccine then we can get back to normal. Everyone wants to get back to normal, but without taking the vaccine it’s not going to happen. If only half of us take the vaccine, then we’re still going to be in the same situation that we are right now.”