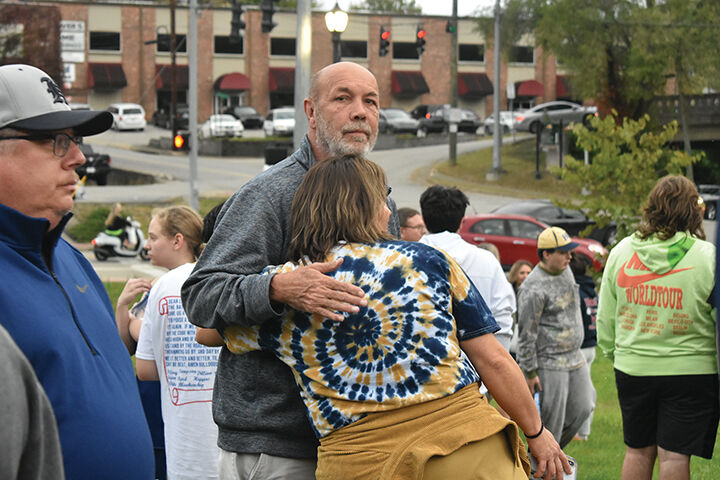 Community members gathered in Triangle Park in Hazard on Oct. 28 to show support for Hazard High School principal and Hazard Mayor Donald “Happy” Mobelini, who has come under fire over the past week after photos and videos depicting “man pageants” with male students performing “lap dances” for male faculty members went public. 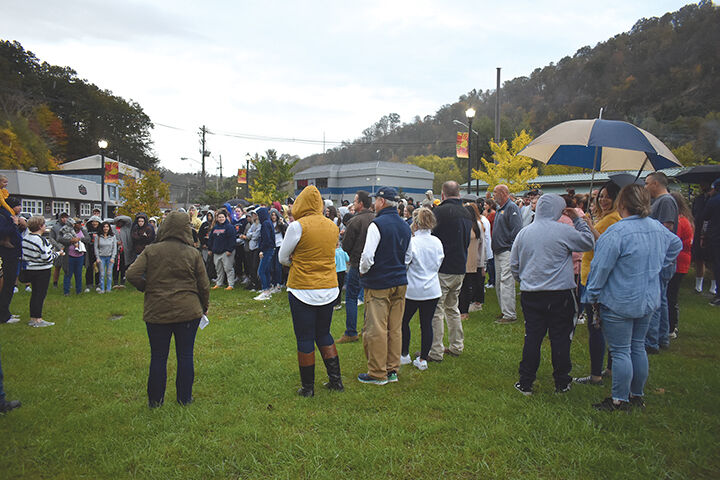 A week after a Facebook post showing images from Hazard High School’s Homecoming celebration thrust the school and community into international attention, the district has responded, but not answered calls to publicly detail disciplinary actions against those responsible for and involved in a “Man Pageant” and “Costume Day” which featured male students dressed in female clothing and giving “lap dances” to male faculty members of the school.

The calls to publicly detail disciplinary actions came from several sources, including Gov. Andy Beshear, who addressed the matter in one of his public press conferences last week.

Beshear said he hopes the school will take appropriate actions. What happened, said Beshear, was “totally unacceptable, inappropriate, shouldn’t happen.” The district, he said, should learn from their mistakes.

“They need to take appropriate action and ensure that this will never happen again. There’s another thing they need to do, and that’s that they need to be talking to these students. That this isn’t something that’s normalized in their mind that they think is okay in school. That doesn’t mean the kids are punished because the adults are letting it go on, but we just want to make sure we’re raising our kids right about what is and what is not acceptable, especially in the world that we live in,” said Beshear. “I hope that the school system does right by the kids.”

Beshear said he does believe that action is being taken, but believes the district needs to be transparent with what those actions are.

“Our public schools are better than this, and I do believe action is being taken. Now I will say what I think that action is ought to be public since the issue is so public,” said Beshear. “I think they will learn from it too.”

The district has also not answered an open records request from the Hazard Herald also requesting that the details of the disciplinary action be made public.

The matter has also not been addressed publicly by Hazard High School principal and Hazard Mayor Donald “Happy” Mobelini, who was featured in some of the photos, as well as videos which surfaced later in the week which revealed that the 2021 Homecoming events were not isolated, but were similar to events held in past years. Mobelini, who has been the focus of much criticism in the matter, was also the focus of a rally held in downtown Hazard on Oct. 28, during which members of the school community expressed support for the mayor and principal.

The attention on Mobelini comes as the principal and school district continue to litigate a lawsuit filed in Perry District Court in 2019 by a former Hazard High School student, who claimed that, while on a school trip to New York City, she and other students had gotten intoxicated after obtaining alcohol and she was sexually

The girl — who was 16 at the time of the incident — claimed in the lawsuit that she reported the assault to Mobelini, who along with other adult chaperones told her the assault was her fault and that she should not file charges against the male student who assaulted her, the lawsuit said.

You Don't Have to Smoke to Get Lung Cancer

The lawsuit is currently set for an August, 2022, trial date.

Photos of the 2021 homecoming activities were posted on the Hazard High School Athletic Facebook page, and were quickly taken down due to the abrupt blow-up of the post online and negative feedback from the community and surrounding areas. On Wednesday, Oct. 27, Hazard Schools Superintendent Sondra Combs released a statement — the district’s only public response to the matter — claiming actions are being taken to investigate the event and prevent future incidents.

“Late in the evening on Oct. 26, 2021, I was made aware of concerns raised by photographs that were posted on the Hazard High School Athletic page. The first thing I did on Oct. 27, was initiate an investigation into the incident. I found photos of inappropriate student-led activities that had since surfaced on social media,” said Combs. “The district has the responsibility to address these issues that arise out of school-based activities. As a district, we are doing exactly that.”

The activities, Combs claimed, were led by the students, as the school district aims to allow students to express their creativity, however, the result was not what was intended.

“The activities were part of homecoming festivities and were driven by the students. We strive to foster creativity in our students, but unfortunately, this time it was carried too far,” said Combs. “Spirit Week at Hazard High School has a long and celebrated tradition. Homecoming activities were planned as a celebration for students, staff and the school community. All were intended to be fun and good natured, however, the activities did not play out as intended. While Homecoming is an annual tradition, there has never been any issue raised prior to this year. Now that an issue has arisen, we are taking this opportunity to review policy and procedures to make certain that it does not happen again.”

Combs said among the actions being taken in response to the homecoming activities are disciplinary action for school faculty, the creation of a student activity committee and the addition and enforcement of training on policies and procedures for school staff.

“Appropriate disciplinary action has been taken following the investigation. As it is a personnel matter, we are not allowed to disclose any further information regarding the specifics of the discipline,” said Combs. “Moving forward, a student activity committee will be developed to review all student led activities, which should prevent any such skits from being performed in the future. While we value our student’s creativity, we also must ensure that it is focused in an appropriate direction and will be more vigilant toward that goal in the future.”

Training, said Combs, will be added and enforced for students and staff.

“Using this as a teachable moment, we will provide social media training for our students and staff. In today’s society students must understand that anything posted online is permanent,” Combs said. “It is there on public display for everyone to see and share around the globe. We would hate to see a single youthful indiscretion haunt one of our children for their entire life.”

The district, said Combs, will continue to enforce the school dress code as well.

“We have a dress code that is to be followed at all times. It is apparent that it was not in this case, but we will assure you that it will be enforced in the future at all school activities, for both males and females. Costumes will be reviewed for appropriateness in addition to being required to meet the dress code. Any costume referencing drug or alcohol use will be strictly prohibited,” said Combs.

Combs said while the activities did get out of hand, actions are being taken and the district hopes that the community will not let this incident overshadow the school’s reputation of striving for excellence.