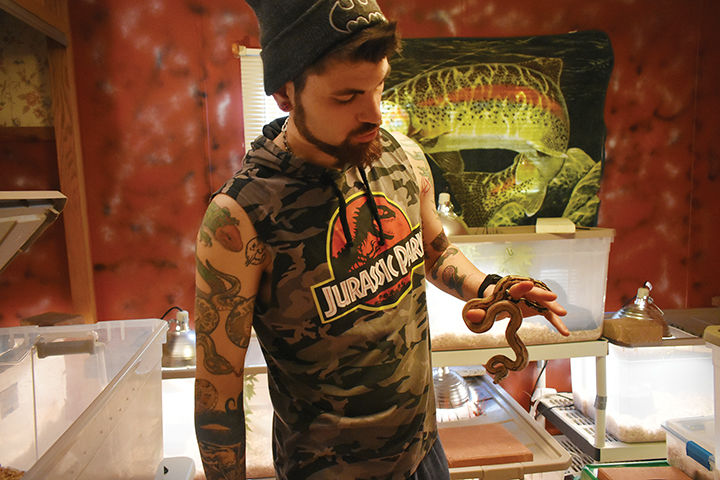 Local resident Samuel Inserra owns more than 10 reptiles, and frequently assists community members with reptile care and education in hopes that more people will understand the beauty of the animals. 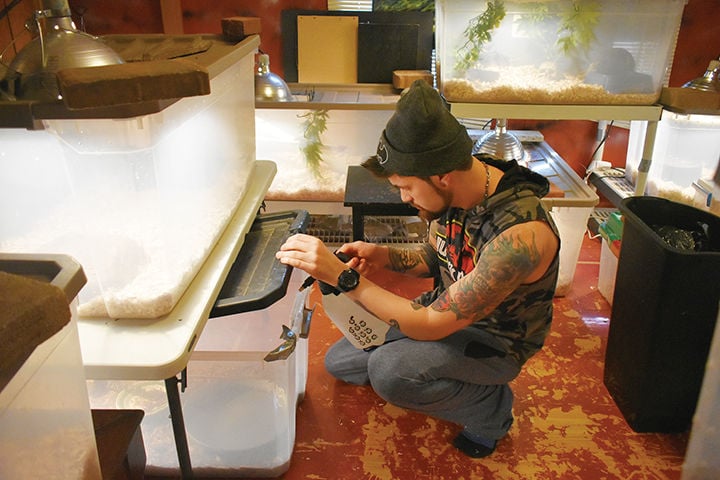 Local resident Samuel Inserra owns more than 10 reptiles, and frequently assists community members with reptile care and education in hopes that more people will understand the beauty of the animals.

During the winter months, proper pet care is a topic discussed by many people. At the forefront of these discussions are dogs, cats, horses and other outside animals. However, one local man wants to remind people that there are certain inside pets that require special attention as well — reptiles.

Samuel Inserra, of Combs, owns 18 snakes, three lizards and two dogs, so he is well aware of the effort that goes into caring for people’s beloved pets. Inserra, who said he has worked with snakes for approximately seven years, used to work as a reptile caregiver at Underground Reptiles, an exotic pet store in Florida, where he said he learned a lot about proper reptile care.

While he has only been in Perry County for a short amount of time, Inserra said he has noticed it is very common for people to believe common misconceptions about reptiles and incorrectly handle them.

People, Inserra said, need to understand the environment they are in and think about how that varies based on the location of where the information was obtained.

“You have to do your research and know what you’re talking about,” said Inserra.

Some of the largest concerns about reptile care in the area include feeding, temperature, cleaning and shelter, he said.

“A lot of people try to keep snakes the same exact way, you can’t,” Inserra said, explaining that care must be provided according to the type of reptile. He said many reptiles can mostly be handled the same way, but feeding and environmental temperature levels vary.

“You basically have to know your animal. You have to know what you’re doing and a lot of people don’t,” he said, stating that most pet stores around this area know generic information about reptiles, but are unable to provide specialized information to customers which can lead to future problems in care.

“When people can’t take care of snakes, they usually look me up and either I keep them or relocate them,” said Inserra, explaining that he tries to be responsive to people who reach out to him. This type of situation, he said, happened a lot more in Florida, but it is common here too.

“Normally what happens is people get snakes and then they either realize that they’re not as fun as people say they are or they get bigger than people say they are, so they try to re-home them and get rid of them,” said Inserra. He continued, “The biggest thing with snakes is that everyone wants a snake because it’s like the cool new pet, like a new fad – they’re cool and you want to be different, but when you get it you realize they sit in a box 24 hours a day, you take them out every now and then and feed them and that’s all they do.”

Lizards also have similar issues, he said, as they can often be testy and untrustworthy at first and are quick to bite until they get to know someone. This is especially true for lizards such as iguanas, said Inserra, which are sweet and tiny as babies, but then go through a “teenager phase” for about two years and, once grown, they are sweet again.

“People don’t put enough time into them,” he said. “People either get bored of them (reptiles) or people get terrified of them because when you leave them in a box they sometimes get nippy.”

Inserra said snakes need to be handled regularly or they won’t be familiar with contact and will think they are just being fed.

Feeding reptiles, he said, is something with which people have trouble.

“Snakes don’t actually measure their food, they’re ambush predators. If a snake is hungry and thinks it can eat it, it is going to try,” said Inserra, explaining that if the snake can’t finish a meal, it will leave it. “They’re opportunistic feeders, so they take food when it comes to them.”

Snakes, he said, learn patterns, so this is why it is a good idea to practice a routine for handling, cleaning and feeding.

A lot of people don’t know that, Inserra said, because breeders made “power feeding” popular in an attempt to try to grow snakes and breed the animals more quickly. If someone is breeding them, the feeding schedule will be different, he said.

“When you have a pet you’re just maintaining them, there’s no reason to pound them with food,” said Inserra, explaining that overfeeding snakes can hurt them and shorten their life.

Ideally, he said, people should feed snakes once or twice a week as a baby, depending on the meal size and the type of snake, and increase it as they age.

“As they get older, you need to reduce that, because as they get older the size of their food gets increased and their metabolism is slowing down,” Inserra said. “A snake’s metabolism in the first year or two years of its life, they will double or triple in size – they will grow, grow, grow. After that, they slow down.”

Approximately 75 percent of snake’s food goes to growth, whereas humans’ goes to energy and regulating their temperatures, he said.

Feeding lizards and turtles is different, Inserra said. Both of these reptiles are often omnivorous, he said, so they need a balanced diet of meat and vegetables. Lizards, according to Inserra, should be fed every day or every other day. As babies, lizards need to be fed a lot of insects, he said, but that diet can be expanded as they grow. A large drawback for this area, said Inserra, is that it can be hard to find insects available for sell in nearby stores.

“Mammals, we have to create our own body heat, we have to warm ourselves. Reptiles don’t, they have to sun themselves,” he said. “They’re cold blooded and have to self regulate their own heat.”

Because of this, Inserra said, reptiles need to be kept in enclosures that have plenty of room to bask, have access to clean water and be kept warm.

This is often a common problem people have with owning turtles, Inserra said.

“People don’t keep turtles correctly at all,” said Inserra. He continued, “Honestly, turtles are one of the most mistreated animals in the reptile world because people don’t treat them right.”

Turtles, he said, can get very large and live a long life if treated properly. However, many people put them in small enclosures, with little heat, not enough water and no UVB, which stunts their growth and shortens their lifespans.

In addition to those common issues, Inserra said that misconceptions about diseases is also a factor in people’s decisions to keep reptiles as pets.

“Reptiles do not produce salmonella, they are carriers for salmonella,” said Inserra, stating that nearly anything could be, including dogs, people, cats and more. People get salmonella from reptiles because the animals are exposed to dirty water or enclosures and people don’t practice proper hygiene. Additionally, the reptiles’ food could be the carriers of diseases, he said.

“Snakes do not spread diseases, they can’t pass diseases on to humans,” he said, explaining that rats are the actual disease spreaders.

There are all kinds of available resources online, said Inserra, and he hopes that people consider that and do their research before deciding to commit to purchasing a reptile as a pet. If anyone has any concerns, Inserra said he is more than willing to help community members learn more about their reptiles, and they can feel free to contact his Facebook page.

Sorry, there are no recent results for popular articles.

Sorry, there are no recent results for popular images.

Sorry, there are no recent results for popular videos.