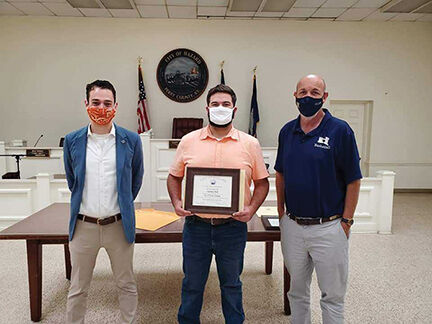 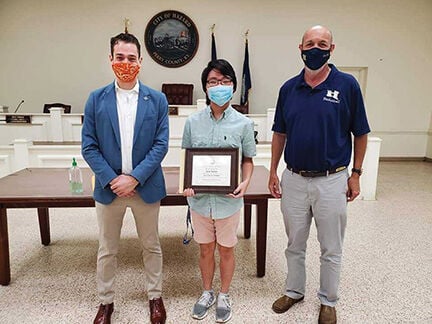 On Aug. 5, Hazard Civic Fellows Zach Hall and Jared Hoskins completed their summer internship. This was the city's second year of offering the internship, and although the COVID-19 pandemic changed many aspects of the program, city officials said they feel it was still a successful experience for the interns and the community as a whole.

“Part of the goal of the fellowship is to have young people think about how they can immediately change their community and get them thinking about what it might look like to come back and continue to see this as a place of opportunity as opposed to a place to get away from. COVID-19 has re-prioritized goals, but I think that is still an important goal,” said Hazard City Commissioner Luke Glaser, founder of the internship and also a teacher at Hazard High School.

“If things were perfect here, people would stay. It's no secret that most of our kids, or a good chunk of our kids leave and don't come back, which means there is opportunity elsewhere. So my philosophy is if it's all about our kids and grandkids, then we need to equip them with the tools that they need to come back and fix things if they so choose,” said Glaser. “Before this program, our young people didn't really have that opportunity.

“I believe this is the most comprehensive city internship program in the state of Kentucky. No other internship provides the opportunity to both high school and college students, and it's paid as well,” said Glaser. “Given the circumstances, I think it was a successful summer and I'm excited to keep it going next year.”

Initially, he said, the city was considering a virtual internship due to the pandemic, but the plan was approved for an in-person program. The candidate interviews were completed virtually and the city and county meetings were held virtually throughout the internship. However, the fellows also participated in in-person activities as well, said Glaser. Among the other activities the fellows participated in was a site visit to Pineville to see how another small town has successfully changed their area, meetings with city and county officials and a book discussion about rural brain-drain and how to prevent it.

“One of the best parts is getting to know people who make the community tick, and they could only do that virtually so that was kind of a shame, but we're just glad it was able to happen,” said Glaser.

Through this year's internship, the fellows completed two major projects that are scheduled to begin next year. One is a community alliance program that will allow different groups of the community to become more involved with local government as well as map areas that need improved, and the other was the selection and creation of necessary signage to be used for downtown revitalization and beautification in the years to come.

“A lot of that stemmed from the strategic plan that came out last year. We looked at it and said what would our fellows be capable of doing,” said Glaser. He continued, “Hazard is a city of villages and each village kind of has its own unique personality. While that's a good thing, it kind of makes or puts us in a silo.”

See the tapes that could unravel a controversial mine project

The community alliance program, said Hoskins, is hopefully going to help the community become more unified. “The goal of that program is to bring a sense of self-responsibility and pride within the community,” Hoskins said.

To complete this project, Hoskins said he and Hall divided the city into various districts and once the program is implemented, those districts will have a certain amount of people serving on a board to organize block parties, community cleanups and any issue they can fix.

“Through this program, anything that they see a problem with, they should be able to fix on their own in terms of small things,” said Hoskins.

Additionally, he said, it will allow them to be closer to city officials for help with larger issues. The signs, Hoskins said, were necessary because outsider tourists reported having trouble determining which direction to go for things to do when visiting Hazard and Perry County.

“The hope is that eventually this program will self-sustain because people are excited about it and want to use it as an opportunity to make neighborhoods look better and be better,” said Glaser.

The internship, said Hoskins, has been a very educational experience that he will be able to use learned skills in the future.

“Overall, this internship was a very in-depth experience of what issues we're facing,” said Hoskins, explaining that he was not aware of issues going on with incentive programs offered by the city or the different taxes that are involved with business. “Before the summer, I wouldn't have known anything that was going on with the commissioner meetings, why isn't anything downtown and now I know what issues they're facing and what they're doing to change that.

“This internship definitely gave me an experience that I would have never been able to get,” he said. “I'll definitely be able to take this experience with me into any problem with working with local government and rural problems.”