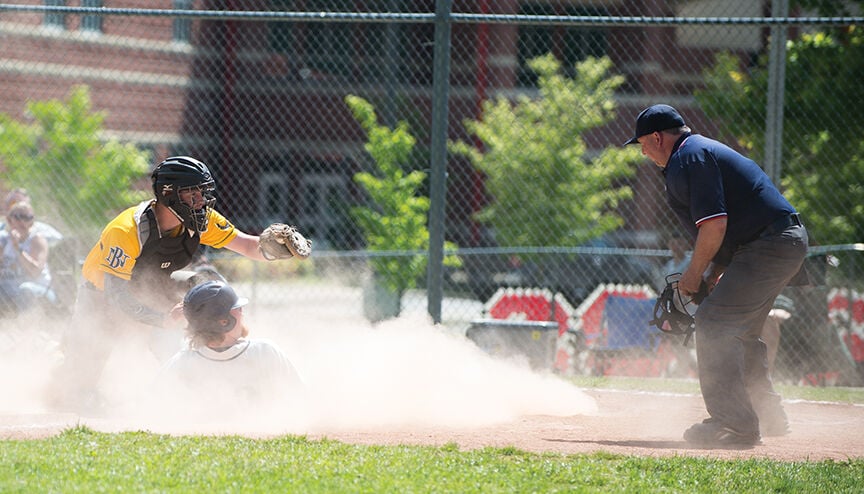 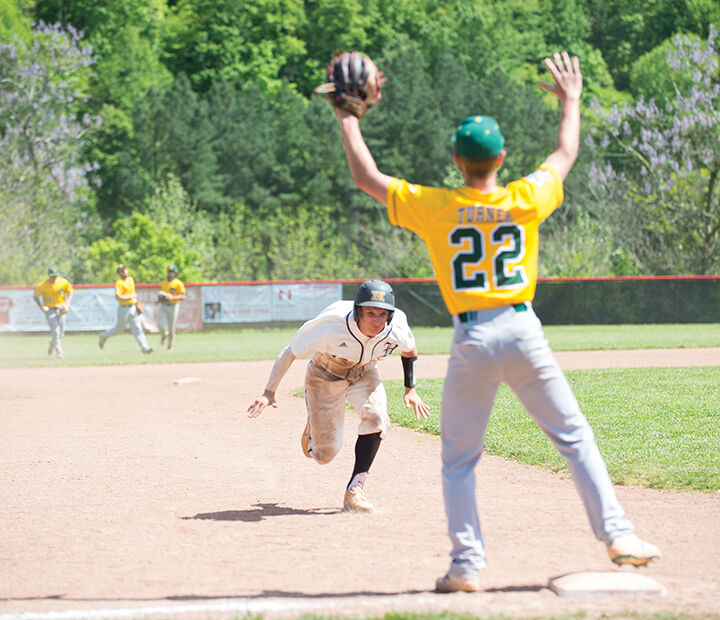 Hazard’s Hank Pelfrey prepares to dive into third base against North Bullitt Saturday afternoon. Pelfrey stole second base on the play and advanced to third on an errant throw to second.

Hazard went 3-0 during the Jim Vaughn Smith Invitational at Belfry over the weekend, but followed those wins with two straight losses to Johnson Central on Monday and Clay County on Tuesday.

The Bulldogs kicked off the Jim Vaughn Smith Invitational with an 8-3 win over Martin County on Friday.

Patrick Shoptaw had three RBIs and scored three runs in the win, but he didn’t record any hits on the evening. Andrew Ford went two for two at the plate. Garrett Miller was two for four with a double and an RBI. Samuel Shoptaw was one for two with an RBI. Max Johnson and Hank Pelfrey each added hits.

Samuel Shoptaw didn’t start the game, but picked up the win in relief. He threw three innings of work and didn’t give up any runs or any hits with six strikeouts and four walks. Matt Craft started the game and went three innings giving up three runs (two earned) on six hits with three strikeouts and three walks. Max Johnson threw one inning of relief and struck out the side.

Hazard got off to a quick start against North Bullitt Saturday afternoon.

The Bulldogs knocked off North Bullitt 7-5.

Max Johnson hit a leadoff double in the bottom of the first to get the Bulldogs going. Samuel Shoptaw followed with a sacrifice bunt to move him over to third. Matt Craft followed by reaching on an error. That allowed Johnson to score the game’s first run.

Hank Pelfrey followed with a strikeout, but he reached first safely on a passed ball on strike three. That put runners on first and third with one out.

As Pelfrey stole second, Craft stole home on the throw as the lead grew to 2-0.

Dawson reached on an infield single.

Andrew Ford grounded out, but Pelfrey scored from third as Hazard held a 3-0 lead after the first inning of play.

North Bullitt got two runs back in the top of the third inning as Owen Barger hit a two-run homer.

Sawyer Patrick picked up the win on the mound for the Bulldogs. Patrick threw the complete game and gave up five runs on eight hits with four strikeouts and two walks.

Johnson finished two for four with a double and RBI for the Bulldogs. David Mullins also doubled and drove in a run as he went two for three at the plate. Jarrett Napier was two for two. Dawson and Patrick each singled.

The Bulldogs closed out the Jim Vaughn Smith Invitational in style with a big 12-1 win over Russell.

Napier picked up the win on the mound for the Bulldogs. Napier threw five innings of work and gave up one run on two hits with five strikeouts and two walks.

Max Johnson threw an inning of relief and didn’t give up any runs or hits, but walked three batters.

Ryan Sartin-Slone had a huge game at the plate to lead the Golden Eagles. Sartin-Slone was three for three with a home run, double and three RBIs. Mason Kestner followed going three for four with a double and two RBIs. Josh Slone was two for three with a double and two RBIs. Brock Butcher was two for four. Keygan Pelfrey doubled for the Golden Eagles. Gavin Crum, Connor LeMaster and Matt Crum each singled in the contest.

Kestner picked up the win on the mound for the Golden Eagles. Kestner threw all seven innings of work and gave up three runs (two earned) on four hits with four strikeouts and two walks.

David Mullins suffered the loss on the mound for the Bulldogs. Mullins there five innings of work and gave up seven runs on 12 hits with three strikeouts and two walks.

Pelfrey threw an inning of relief and didn’t give up any runs or hits, but walked one batter.

Dawson threw 2/3 innings of work. Dawson gave up two hits and walked two batters, but didn’t give up any runs.

Johnson threw 1/3 of an inning.

Hazard couldn’t couldn’t get back in the win column Tuesday as Clay County picked up a 7-5 win over the Bulldogs.

Dalen Couch picked up the win for Clay County. He threw five innings of work and gave up five runs (one earned) on five hits with two strikeouts and two walks. Hubbard threw two innings of relief and didn’t give up any runs on two hits with three strikeouts and no walks.

Max Johnson led the Bulldogs by going three for four at the plate with a double. Garrett Miller was two for three with a double and three RBIs. Sawyer Patrick also added a hit.

Andrew Ford suffered the loss for the Bulldogs. Ford threw four innings of work and gave up six runs (three earned) on two hits with two strikeouts and seven walks.

Miller threw two innings of relief. He gave up one run on on hit with two strikeouts.