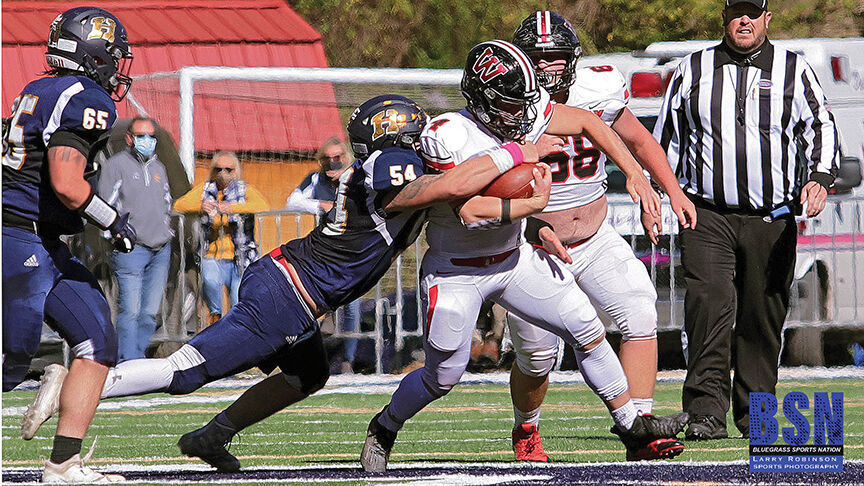 Hazard’s Ryan Dean wraps up a Whitley County ball runner Saturday afternoon at home. The Bulldogs picked up a 25-21 win over Whitley County. 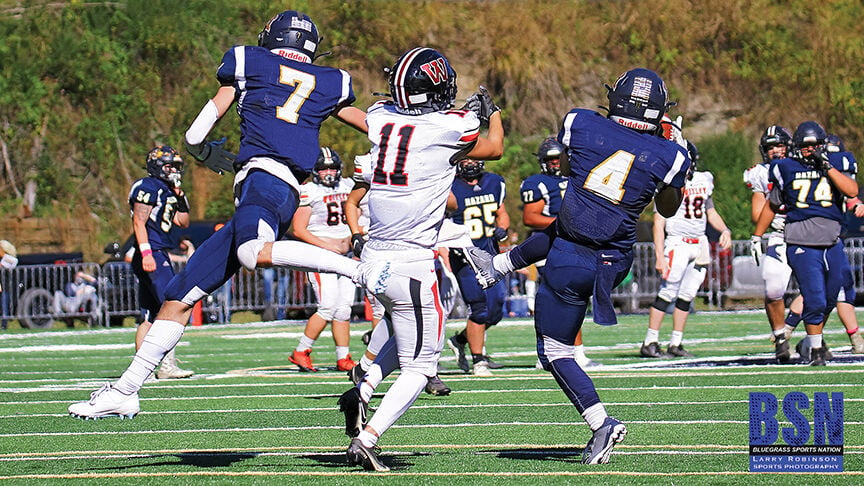 Hazard’s Zane Deaton (4) comes up with an interception against Whitley County Saturday at home as Andrew Ford helped on the coverage as well. The Bulldogs picked up a 25-21 win over Whitley County. 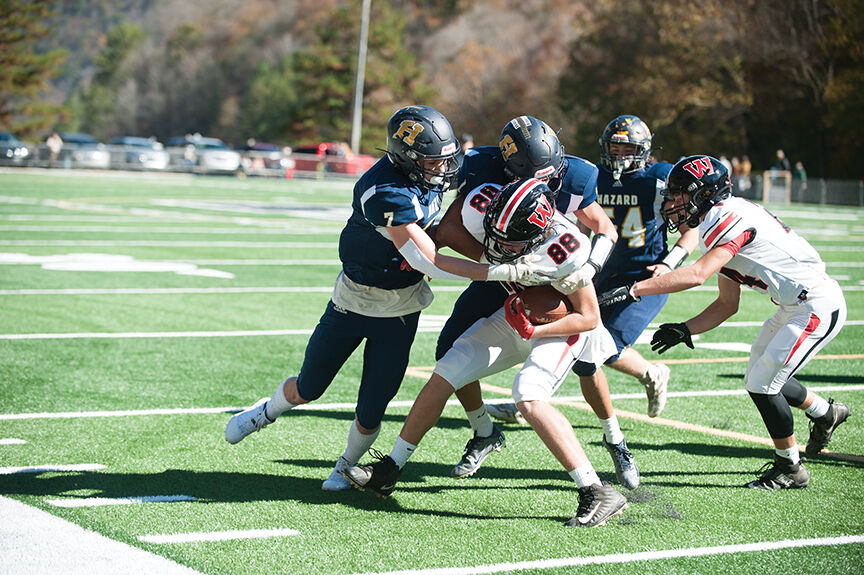 Hazard’s Jondon Olinger (1) and Andrew Ford (7) wrap up Whitley County’s Sam Harp for a tackle Saturday at home. The Bulldogs picked up a 25-21 win over Whitley County.

Hazard hadn’t played a game at Daniel Field all season, but after the new turf was laid, the Bulldogs picked up a big 25-21 win over Whitley County in their true home opener Saturday afternoon.

On Hazard’s second possession of the game, Max Johnson scored from three yards out to give the Bulldogs a 7-0 lead after Jonah Helm’s extra-point kick.

Whitley County then got going in the second quarter. Quarterback Caden Petrey found Mason Croley for a 57-yard TD with 9:35 left to play in the first half. After the extra-point, the game was tied at 7-7.

Whitley County got the ball back and went back to the air. Petrey found Aaron Steely wide open on a seam route for a 47-yard TD with 8:44 left in the first half to push the lead to 14-7.

Hazard answered back before the halftime buzzer. Bulldog quarterback Garrett Miller found Tyson Turner for a 15-yard TD with just 43 seconds left in the half to cut the lead to 14-13.

Hazard’s Zane Deaton came up with an interception with just 10 seconds left to take the game into the halftime break.

The Bulldogs didn’t get off to a good start in the third quarter, though.

Whitley County’s Woody Lawson returned the opening kickoff of the second half nearly 90 yards for a TD to push the lead to 21-13.

Hazard’s Max Johnson scored his second TD of the game with 2:30 left in the third quarter to cut the Whitley County lead to 21-19.

Miller found Johnson for another TD near the end of the third to give the Bulldogs the 25-21 lead.

Husker Extra Live: With kickoff less than 48 hours away, it's time to preview Purdue

Johnson led the rushing attack with 153 yards and two TDs on 25 carries. Johnson also had two catches for 51 yards and a TD.

The Bulldog offense combined for 322 total yards of offense.

The Bulldog defense did force three turnovers as well. Ryan Davidson, Johnson and Deaton all came away with interceptions in the win.

Petrey led the way for Whitley County. Petrey was 20 for 40 passing for 266 yards and two TDs with three interceptions.

Hazard (2-5) is scheduled to host Bell County at 7:30 p.m. Friday in the regular season finale.