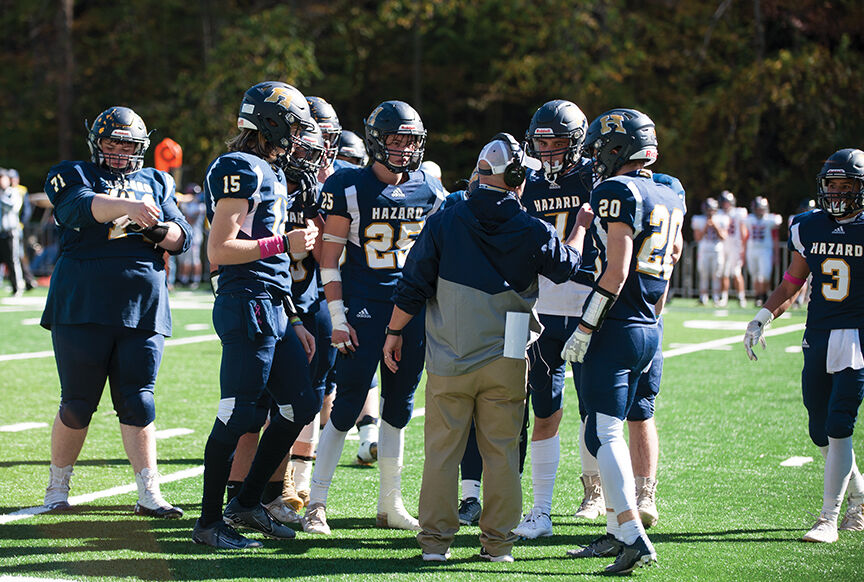 Hazard head coach Dan Howard talks with his team against Whitley County in action earlier this season. The Bulldogs are set to host Phelps in the opening round of the Class A playoffs next week. 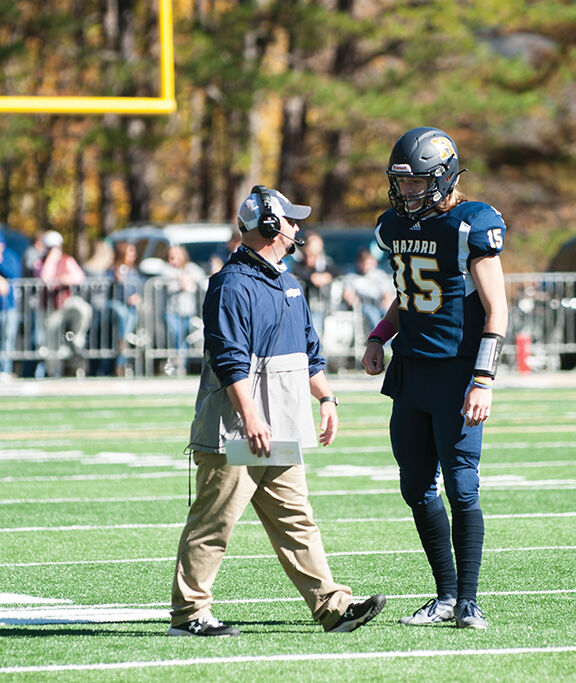 Hazard finished the regular season with only two wins on the year.

The Bulldogs had momentum heading into the playoffs.

Hazard didn’t have a game Week 9, the last week of regular season play.

The KHSAA announced that the start of the playoffs would be pushed back a week from this Friday, November 13 to next week November 20.

How will that move affect the Bulldogs’ momentum heading into the playoffs?

“We’re kind of in the same situation as everybody else,” Hazard coach Dan Howard said. “We really wish we would’ve picked up a game last week if we’d known that the playoffs were going to get pushed back a week. How this affects us is kind of how well our kids and staff handle it. We are going to practice and prepare like we’re playing this week. We’re not going to take any days off. We definitely aren’t just going to sit and not do anything. We’re going to work and run this week and next week and prepare for Phelps. We’re going to treat it like it’s our last game of the season because if we don’t show up and play, it will be. This week delay won’t affect older teams. We can control the delay, but we can just prepare the best we can and we’re going to work hard and prepare for Phelps.”

“This isn’t a typical Phelps team,” Howard said. “Some years, it’s tough for them because they don’t always have a lot of talent. That’s just the reality. I don’t mean any disrespect to them. But this season, they have some players. They’re really good. They have Dom Francis who might be the district Player of the Year this year. The game we won over there, they were ahead at halftime and probably feel like they should’ve beat us. But we pulled out the win and we used that momentum and started getting healthy and rolled that into a win over Whitley County the following week. Against Whitley County, our defense showed up tremendously in the second half. We gave up a kickoff for a touchdown, but our defense only gave up 40 yards and no first downs in the second half.”

The Bulldogs have improved a lot from the start of the season to the close of regular season play.

Hazard only had two games at Daniel Field.

The Bulldogs have played a tough schedule with many of the games being true road games.

“It’s tough to travel so much,” Howard said. “I told our bus driver after the Phelps game that I didn’t want to see him for a month. I don’t want to make excuses, but we’ve had to practice at the baseball field all season and that gets old. We finally got to start practicing on our field last week. So being home in the first round of the playoffs is huge.

“But we played a tough schedule on purpose. I told you before the season started that it might take to Week 4 or Week 5 to start figuring out what we had. That held true. Being a first-year head coach and not having the full offseason to get ready, really put us behind. I didn’t coach last year at all and wasn’t around the team. I know what coach Mark Dixon did and worked with him for years, but it took me a while to put in our stuff. I knew the kids and it took a while, but we play those tough teams to get better and I think we have done just that. I don’t think we’re the same team from the beginning of the season. We’ve played Danville, Paintsville, Harlan County and Pikeville. That’s just going to make you better. I think you can see the results with the two wins to end the season.”

The Bulldogs have improved in all facets of the game.

On offense, a lot of improvement came with the emergence of running back Max Johnson.

Johnson didn’t start out the season as the top running back.

But he certainly took that position over.

Johnson leads the team in rushing with 571 rushing yards and four TDs on 86 carries.

Quarterback Garrett Miller has been injured at times, but looked really good against Whitley County in the season finale.

The Bulldog offensive and defensive lines have also improved all season.

The offensive line seems like it gets stronger as the game goes on because their strength and size wears opposing defensive lines down.

The Bulldog defensive line has some young talented players who have kept improving and improving over the season.

“I think Max Johnson coming on and Garrett Miller and some of our receivers and other players getting healthy has really helped us,” Howard said. “Our offensive line and defensive line mostly play one way, while some of our other guys have to play both ways. That helps our offensive line wear teams down with their size and strength. On defense, our line has a pair of freshman who clog things up and are talented and other coaches ask about their age and are always like, ‘Wow,’ when they find out they’re freshman. I think the biggest thing is that all of our guys have bought into what we’re trying to do.”

Hazard like the rest of the teams across the state will be sitting out this weekend, but will open the first round of the playoffs November 21 at 1:00 at home against Phelps.