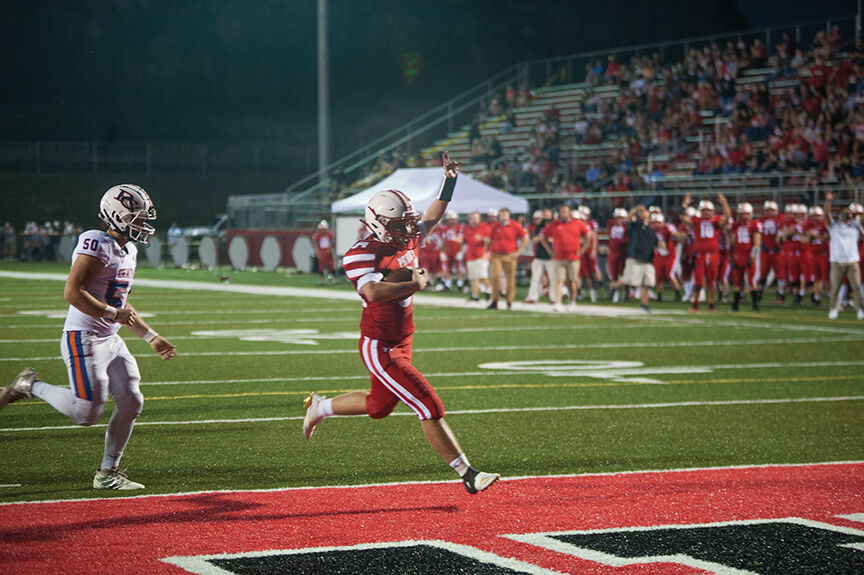 Perry Central’s Elijah Gayheart raises his hand as he crosses the goal line for a TD against Pike Central last Friday night. 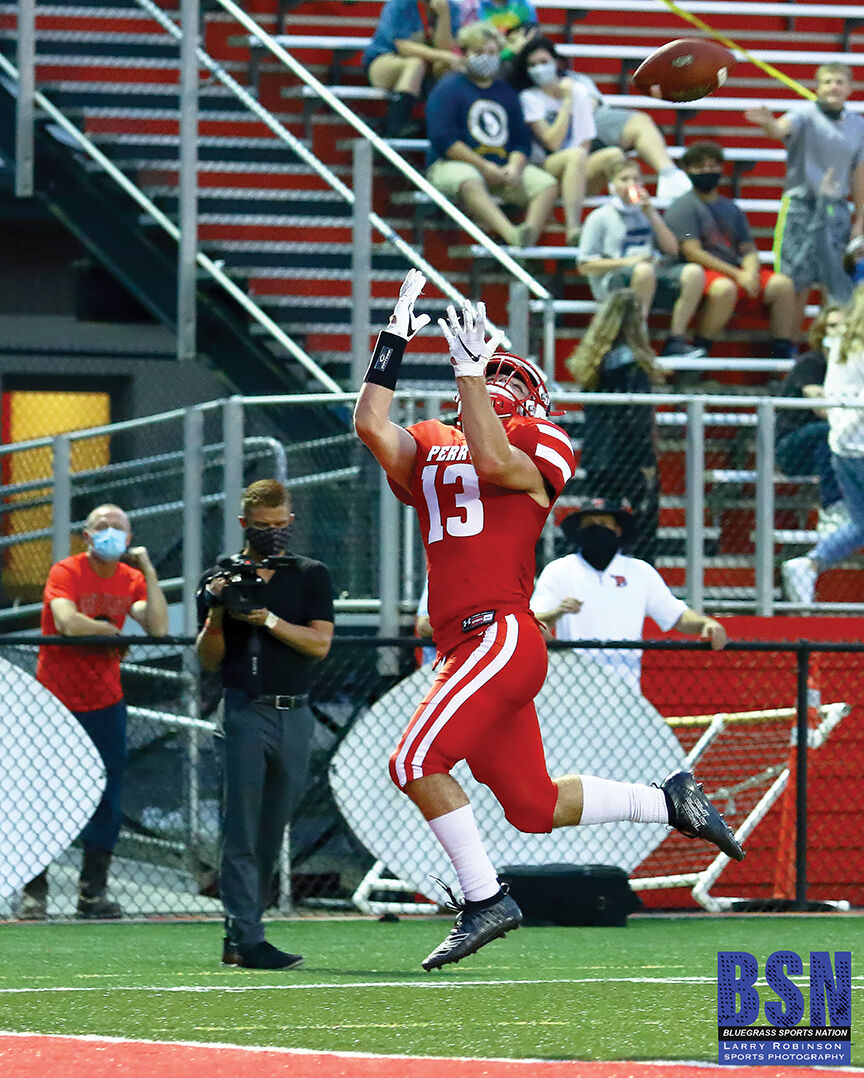 Perry Central’s Cade Miller hauls in a catch against Pike Central in action last Friday night. The Commodores picked up a 37-23 win over the Hawks.

On Friday, Perry Central took on Pike Central and pulled out the 37-23 win, making this the first win for head coach Mark Dixon in his Commodore debut.

“They both did whatever was asked of them and both played really well,” said Dixon. “The thing I like most about these guys is their attitude and how unselfish they are.”

McKenzie and Mullins both took plenty of snaps in Friday’s game against the Hawks.

“They are two totally different types of quarterbacks,” stated Dixon. “They do different things, but both acted like leaders and were uplifting teammates and each other.”

For good reason as well.

McKenzie was the team’s leading passer, throwing for 155 yards, connecting on 10 of his 16 passes.

Although McKenzie was the leading passer, that doesn’t mean Mullins didn’t get his opportunity.

Mullins completed one of his five attempts but the one he completed was for a 12-yard TD.

Both quarterbacks also did what they could to help contribute to the running game as they accounted for a combined 62 yards (Mullins with 41 and McKenzie with 21).

The Commodores rushing attack however, was led by sophomore running back Elijah Gayheart, who scampered for 121 yards on 17 attempts.

Gayheart was an intrical part in consistently moving the chains for the Commodores on the evening.

A player for the Commodores who became hard to account for was junior Cade Miller.

Miller pulled time at running back and receiver for Perry Central and accounted for two TDs on the night (one rushing and one receiving).

Red Report: Bootle, Husker DBs got in their workouts — a whole lot of them — this offseason

Miller’s total yards came out to be 62 with 21 being rushing and 41 being receiving.

As stated earlier both the Pike Central and Perry Central offenses came out slow, but in the second half the Commodores were ready for war.

“We made mistakes early on and it led to some big runs by their (Pike Central’s) quarterback,” said Dixon. “In the second half, we got some stops and the guys got their confidence and we made a run.”

The Commodores began the second half down 15-13 to the Hawks.

The teams traded TDs back-and-fourth before the fourth quarter began with the Hawks leading the Commodores to a 23-21 lead.

This was the point that the Commodores busted loose as McKenzie found sophomore wide receiver Ty Vinson for a 59-yard TD.

Vinson led the team in receiving on that one reception.

As the Commodore offense picked up steam and seemingly couldn’t be stopped, the defense began to pick up momentum of its own, holding the Hawks scoreless in the fourth quarter.

Defensively, Perry Central had seven tackles for loss and was led in tackles by Hunter Griffie, Jayvine Crowley, and Caeden Sebastian who all had eight tackles apiece.

It was the defense in the end that helped the Commodores seal the 37-23 win over the Hawks for Dixon’s first win.

“The credit goes to the players and coaches around me,” said Dixon. “They really worked hard to be prepared and that showed and they deserve the credit.”

Dixon and the Commodores are now looking at North Laurel in their Week 2 matchup as that game kicks off September 18th at 7:30 p.m.