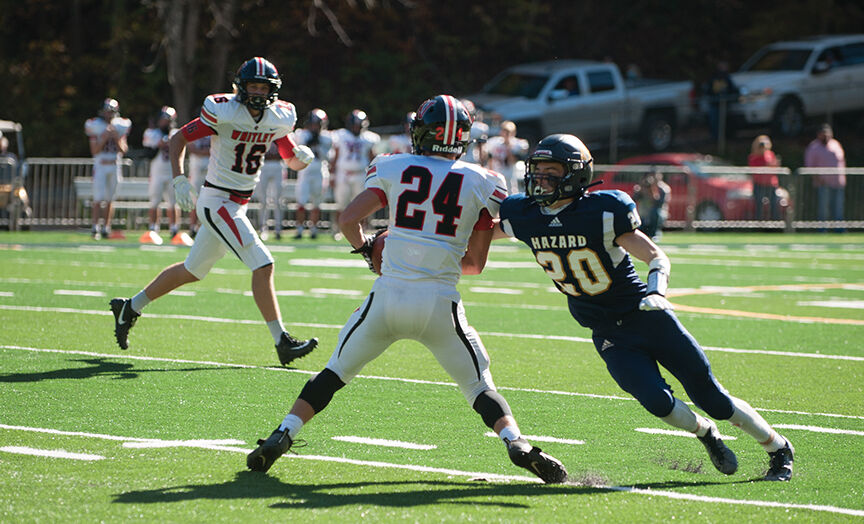 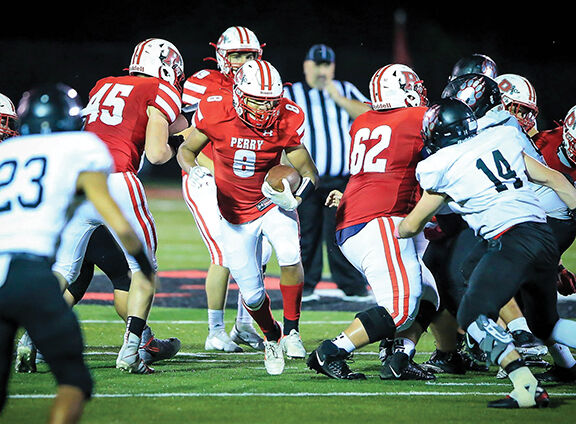 The Bulldogs picked up a 21-6 win over the Hornets.

That’s how Hazard got home field advantage against the Hornets.

Phelps’ offense has been good all season, but the Bulldogs kept them in check.

Dom Francis was four for 12 passing for 39 yards and two interceptions. Francis also rushed for 85 yards and a TD on 14 carries.

Phelps only had 115 total yards of offense against Hazard in the first meeting.

Hazard didn’t have Garrett Miller at quarterback in the game.

Max Johnson was behind center and had himself a game.

Johnson was five for nine passing for 81 yards and a TD with an interception. Johnson also went nuts running the ball. Johnson rushed for 224 yards and a TD on 29 carries.

Andrew Ford had three catches for 69 yards and a TD.

On defense, Jacob Fields helped Hazard seal the win with a pick six late in the game. Tyson Turner also had an interception in the game.

Johnson and Keaton Napier each forced Phelps to fumble the ball and the Bulldogs recovered both of the fumbles.

Phelps can’t turn the ball over in the opening round rematch.

The Hornets also have to get Francis going.

To get him going, they may have to look to get the ball to someone like Seth Mayhorn early to open things up for Francis.

The Hornets may use Steven Layne at quarterback some too just to give the Bulldogs a different look at times. Layne has been effective at quarterback. Layne is 12 for 24 passing for 104 yards and two TDs with two interceptions.

Francis is the top passer and rusher on the team. Francis is 40 for 93 passing for 561 yards and four TDs with three interceptions. He has rushed for 1,108 yards and 11 TDs on 121 carries.

Cainan Land leads the wide receivers with 22 catches for 338 yards and four TDs.

Hazard finished the season with back-to-back wins over Phelps and Class 5A Whitley County.

The emergence of Johnson has been a big reason for the Bulldogs’ success.

Hazard dealt with some injuries in the regular season and started to get healthy late in the season.

Miller is 49 for 93 passing for 767 yards and seven TDs with six interceptions.

Johnson has rushed for 571 yards and four TDs on 86 carries. Tyson Turner follows with 277 yards and two TDs on 48 carries.

Who 2 Watch: For Phelps, Dom Francis. For Hazard, Max Johnson.

Francis will have all eyes on him.

He will be the focus of the Hazard defense.

So maybe he throws more against Hazard, especially early.

If he can open things up in the pass game, that could open up running lanes for him.

Look for Phelps to try and get others involved early, so that will open things up for Francis.

Francis will have to have a big game if the Hornets want to knock off Hazard and advance to the second round of the Class A playoffs.

Johnson has been a difference maker for the Bulldogs.

He can be the workhorse and get 20 or more carries.

Former Wildcat safety Will Parks released by the Eagles

He is quick and can break big runs.

He can run inside and outside.

He makes plays on defense as well.

Against Whitley County in the regular season finale, Johnson kept getting stronger as the game went on.

Johnson and his offensive line wore down Whitley County.

If Johnson and his line can wear Phelps down, the Bulldogs will have a chance to move on to the second round of the Class A playoffs.

Both teams have been off for three weeks, so both teams should be rested and healthy for the Class 4A playoffs.

Letcher Central won the regular season meeting 28-7 over the Commodores.

The Commodores struggled offensively against Letcher Central in the regular season meeting. Perry Central rushed for 42 yards as a team and added another 34 through the air. The Commodores only had 76 total yards of offense.

That’s not going to be good enough if the Commodores want to pick up a win Friday night.

Quarterback Chanse McKenzie was five for 13 for 25 yards and an interception. Charles Mullins was one for seven passing for nine yards and TD.

The Letcher Central front was pressing all game. The Cougars had two sacks on the night and three tackles for losses.

The Cougars for 241 yards and threw for 113 yards against Perry Central. Letcher Central racked up 354 total yards of offense.

Letcher Central quarterback Carson Adams was seven for 14 passing for 113 yards and two TDs. He also rushed for 67 yards and a TD on 15 carries.

Hayden Brashear rushed for 121 yards and a TD on 10 carries.

Sam Little added 28 rushing yards and he had a 26-yard TD.

Barnette and Cooper Bailey each had sacks for the Cougars.

Barnette also had an interception.

Perry Central will have to increase its production on offense to pull out the win.

The Commodores have played two quarterbacks all season.

McKenzie was 41 for 73 passing for 429 yards and a TD with an interception.

Mullins is 25 for 48 passing for 302 yards and five TDs with two interceptions.

If one or both get hot, the Commodores could have a shot to knock off Letcher Central.

The Cougars have already seen both quarterbacks, so the interchangeable aspect of the duo won’t shock Letcher Central.

One or both of the Perry Central quarterbacks will have to have big games if the Commodores want to knock off Letcher Central Friday night.