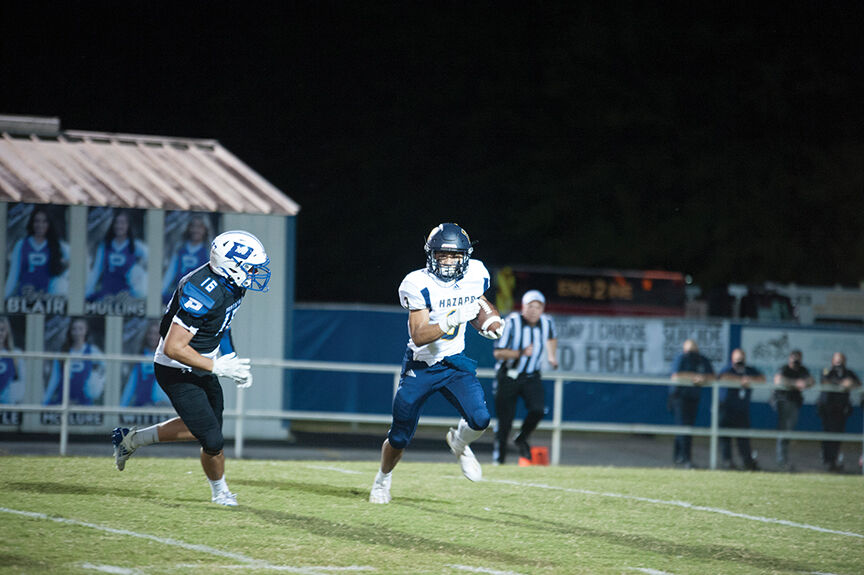 Hazard’s Tyson Turner runs with the ball in action against Paintsville last Friday night. The Bulldogs fell to the Tigers, 54-0. 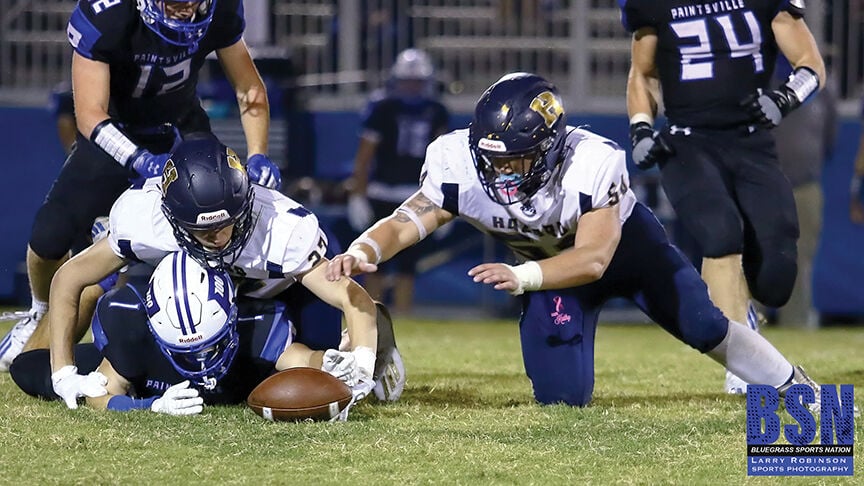 In Friday’s matchup between Paintsville Tigers and Hazard, the Tigers put together a full game coming away with a 54-0 shut out win over the Bulldogs.

Paintsville scored early driving down the field in just 52 seconds.

The Tigers capped their first drive off with a three-yard TD run by quarterback Jake Hyden with 9:08 left in the first quarter.

Hazard needed to come out on their first drive and answer back, but the Bulldogs’ efforts were thwarted by the Paintsville defense. The Tiger defense forced a turnover on downs with 7:45 left in the first quarter.

However, the Hazard defense stepped up with 5:41 to play in the first quarter and got the ball back for their offense as they forced the Tigers to punt.

The Bulldog offense was unable to move the ball though and was forced to punt with 3:55 to play in the first quarter.

On that punt, the Paintsville returner muffed it and gave the ball back to the Bulldogs giving them another opportunity to put the ball in the end zone.

The stingy Paintsville defense wasn’t ready to give up points, though stopping the Hazard offense on its first three plays leaving them with fourth and seven to go.

The Bulldogs’ quarterback Garrett Miller dropped back to pass on fourth down and was sacked by the Tigers’ Luke Hyden forcing a turnover on downs with 2:16 to play in the first quarter.

The Tigers drive extended into the start of the second, but it didn’t take long for Paintsville to punch it in the end zone. Paintsville sophomore running back Harris Phelps scored on a 25-yard TD run with 9:08 left in the second quarter.

Phelps’ TD extended the Tiger lead to 14-0 over the Bulldogs.

The Bulldogs needed a score, but yet again the Paintsville defense denied that need and forced the Bulldogs to punt.

However, the Paintsville special teams stepped up and blocked the punt with 7:59 left in the second quarter.

Austin on the radio: Benhart locked in at RT; freshman Corcoran will 'play this year'

With good field position, the Tiger offense swiftly moved into the redzone where Hyden found one of his favorite targets in Karsten Poe for a nine-yard TD pass with 5:57 left in the first half of play extending the Tiger lead to 20-0 after a failed extra-point kick.

Paintsville’s defense answered the call again with 4:50 left in the first half, forcing the Bulldog offense to punt again on fourth and 45 to go.

With 2:20 left in the first half, Phelps scored his second TD on the evening as he scampered into the end zone on a 62-yard run that put the Tigers up 26-0 after a failed two-point conversion.

The Bulldogs got the ball back and were forced to put it in the air due to the 26-point deficit they’d incurred.

With 1:17 left in the first half of play, Paintsville’s Zach Thompson intercepted a pass giving the Tiger offense another opportunity to extend their lead before the halftime break.

With 55 seconds left in the half, Hyden connected with Jonah Porter on a screen pass that went for 46-yards putting the Tigers on the one-yard line. Hyden capped of the drive on a one-yard plunge into the end zone with 46.7 left in the half.

Hyden’s TD put the Tigers up 33-0 after the PAT was good.

The Tigers continued to dominate and Hyden added onto his already spectacular night throwing two more TDs, the first to Devin Hall for 62-yards and the second to Colby Fugate for 70 plus yards.

Thompson scored the final Tigers TD on a three-yard TD run that gave the Tigers their 54-0 win over the Bulldogs.

Thompson finished the night with four carries, 40-yards, a pick, and a rushing TD.

Phelps had seven carries for 82-yards and two TD’s on the ground.

The Tigers are now prepping to go on the road where they will take on Perry County Central this Friday.