Hazard’s Jarrett Napier and Wade Pelfrey celebrate after Napier hit a game-winning three against Louisville Collegiate last Thursday night in the opening round of the All “A” Classic in Richmond at McBrayer Arena. 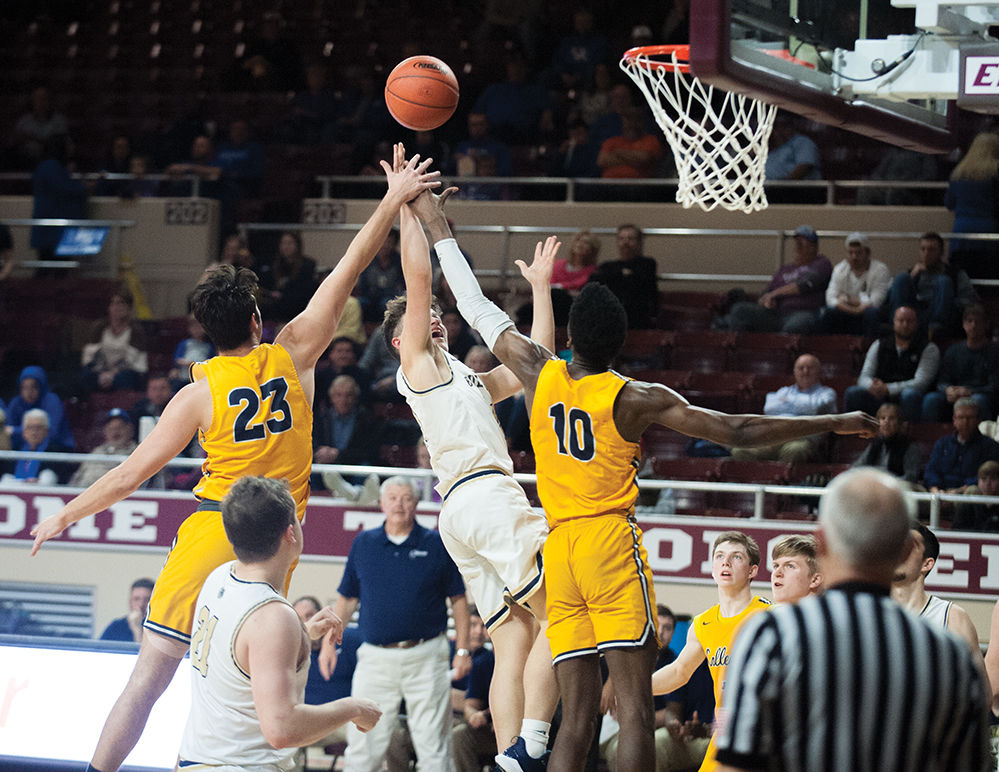 Hazard’s Wade Pelfrey shoots a fall-away jumper over a pair of  Louisville Collegiate defenders last Thursday in the All “A” Classic in Richmond. 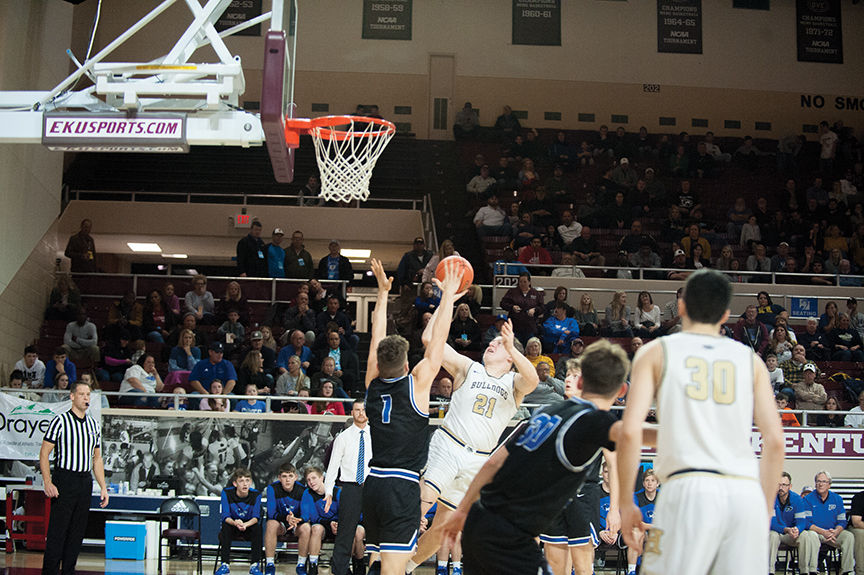 Hazard’s Reece Fletcher goes up for a shot over Paintsville’s Nick Keeton Friday night in the All “A” Classic.

RICHMOND — Hazard had a good showing at the All “A” Classic in Richmond last week.

The Bulldogs won two games and advanced all the way to the semifinal round before being knocked out of the tournament by St. Henry’s 55-41.

The Bulldogs knocked off Louisville Collegiate 42-39 in the first round and followed that with a 48-39 win over Paintsville in the quarterfinals.

Hazard just ran out of steam against St. Henry’s Saturday night in the All “A” Classic semifinals as the Bulldogs fell 55-41.

Hazard just couldn’t score in the second half.

The Bulldogs were outscored 36-13 in the second half.

Hazard jumped out to an early lead, though.

Wade Pelfrey knocked down a three to give the Bulldogs a 3-0 lead. Pelfrey scored the Bulldogs’ first seven points of the game. Hazard jumped out to a 7-3 lead.

Jacob Johnson scored with 39 seconds left in the first quarter as the Bulldogs held a 10-7 lead after the first stanza of play.

Wyatt Vieth opened the third with a three to cut the Hazard lead to 28-22. Jude Bessler followed with another three for St. Henry’s to cut the lead to 28-25 with 6:43 left in the third. Bessler scored again at the 5:55 mark to give St. Henry’s its first lead at 29-28. Vieth knocked down another three and Bessler scored again to cap off a 15-0 run to open the third quarter of play.

Connor Shea knocked down a three with 28 seconds left in the third to give St. Henry’s a 42-35 lead entering the fourth quarter of play.

St. Henry’s kept the momentum going in the fourth. Ryan Butler opened the fourth with a three to push the lead to 45-35.

Hazard only scored six points in the fourth and couldn’t score enough to get back in the game.

Hazard stepped up its defensive efforts in the second half against Paintsville last Friday night in the All “A” Classic state tournament.

The Bulldogs outscored Paintsville 24-18 in the second half to pick up a 48-39 win and advance to the All “A” Classic semifinals against St. Henry.

Paintsville took an early 3-2 lead as Baron Ratliff knocked down a three with 5:53 left in the first. Nick Keeton knocked down a jumper with 1:14 left to push the lead to 10-6. The Tigers held a 10-7 lead at the end of the first quarter of play.

Hazard fought back in the second quarter. Jacob Johnson scored on a tip-in with 6:11 left to play in the first half to tie the game at 14-14.

Paintsville’s Colby Fugate answered with a three to push the Paintsville lead to 17-14.

Jacob Johnson scored the last basket of the first half as he knocked down a three with 31 seconds left. That gave Hazard a 24-21 lead entering halftime.

The Bulldogs scored six quick points out of the gate in the third to push the lead to 30-21.

The Hazard lead continued to grow as Tyson Turner knocked down a three with 2:09 left in the third to push the lead to 35-23.

Paintsville answered with a 7-0 run to cut the lead to 35-30 with just nine seconds left in the third.

Pelfrey knocked down a three to beat the third quarter buzzer and give the Bulldogs a 38-30 lead entering the final stanza of play.

Nick Keeton opened the fourth quarter with a basket for the Tigers to cut the lead to 38-32.

Johnson sealed the win with a pair of free throws with 50 seconds left.

It came down to one final shot.

With the game tied at 39-39, Hazard had the ball and coming off of a timeout, Jarrett Napier had the ball in his hands.

The moment wasn’t too big as Napier didn’t hesitate to fire a three with the final seconds ticking off of clock.

Napier’s three drilled the bottom of the net as Hazard picked up the 42-39 win over Louisville Collegiate in the opening round of the All “A” Classic at McBrayer Arena in Richmond on Thursday.

Hazard’s Tyson Turner knocked down a jumper to cut the lead to 32-30.

Louisville Collegiate’s Chez Moore split a pair of free throws with 7:01 left to push the lead to 33-30.

Hazard’s Wade Pelfrey answered with a three to tie the game at 33-33 with 6:43 left. Pelfrey followed with a layup to give the Bulldogs a 35-33 lead with 5:57 left to play; he was fouled on the play and he knocked down the free throw as the lead grew to 36-33.

Pelfrey fired in another three to put the Bulldogs back in front 39-37 with 3:46 left.

With just 29 seconds left, Moore knocked down a pair of free throws to tie things back up at 39-39.

That set up Napier’s game-winning three.

Pelfrey had 16 points, four assists, three rebounds and a steal to lead the Bulldogs. Logan Hall followed with 16 points, four rebounds, one assist and one block. Napier and Jacob Johnson each scored three points in he Bulldogs’ win. Reece Fletcher finished with two points and eight rebounds. Turner chipped in two points for Hazard.