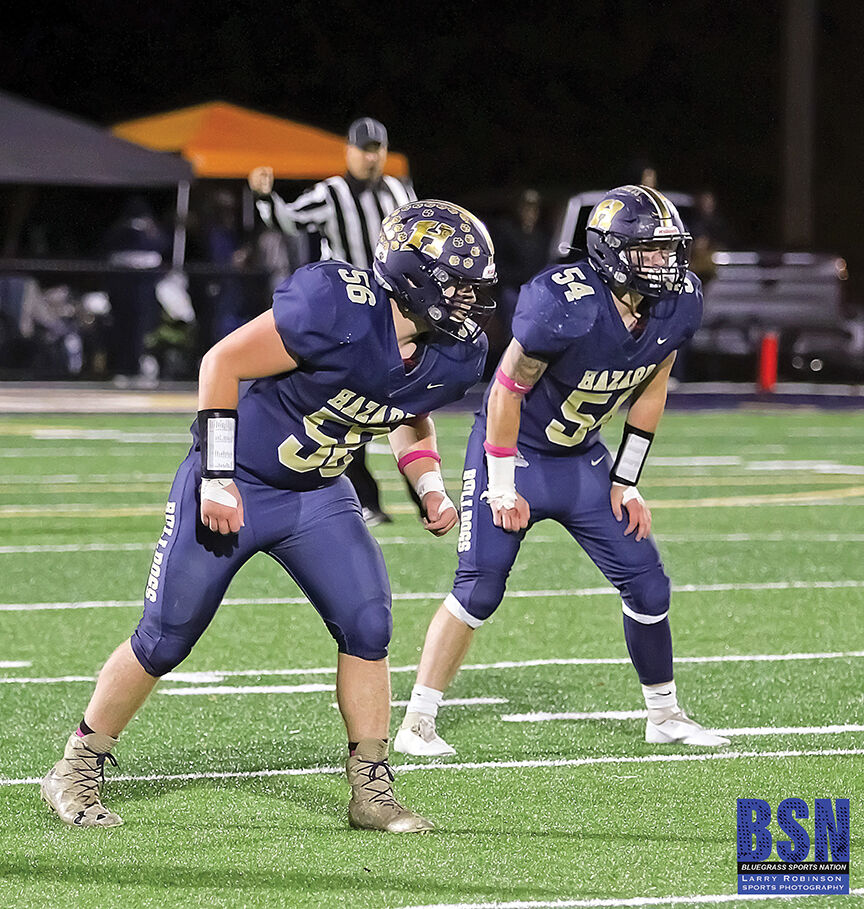 Hazard linebackers Cameron Caudill (56) and Ryan Deaton (54) prepare to attack before a snap last week at home against Pikeville. The Bulldogs lost the district matchup 17-0 to the Panthers.

Hazard’s Max Johnson runs with the ball against Pikeville in action last Friday night. The Panthers kept Johnson quiet all night as Johnson finished the game with a 14-yard catch. Pikeville pulled out a 17-0 win in Class A District 7 play. Hazard will open the first round of the playoffs at home against Sayre.

HAZARD — Hazard pulled off a stunning 21-12 upset win over Pikeville last season in the second round of the Class A playoffs.

Last Friday, the Bulldogs couldn’t make it two straight against the Panthers as Pikeville pulled out a 17-0 shutout win over the Bulldogs.

The win also gave Pikeville the No. 1 seed heading into the Class A playoffs.

Behind a steady ground attack headed by their strong offensive line and Blake Birchfield running behind them, the Panthers pulled out a 17-0 win over Hazard last Friday night.

Pikeville’s defense bended, but never broke in the shutout win.

On the opening drive, Pikeville marched down the field and Birchfield capped off the long drive with an eight-yard TD run with 8:52 left in the first quarter.

Hazard pinned Pikeville inside their own five-yard line on the Panthers’ next possession.

On Hazard’s third possession of the game, the Bulldogs marched the ball down field. Hazard had the ball inside of Pikeville’s 10-yard line and on fourth and fourth from the Panther six, Sam Wright came up with an interception to thwart Hazard’s attempt at getting on the scoreboard with 7:30 left in the second quarter.

The Panthers added to their lead before the end of the first half as Aaron Chang knocked down a field goal with 1:07 left to push Pikeville’s lead to 10-0.

Hazard opened the second half with the ball. The Bulldogs once again drove the ball deep in Pikeville territory, but couldn’t score.

The game score remained 10-0, until the fourth quarter.

With 7:14 left, Blake Birchfield scored on a 33-yard run to push the lead to 17-0. Birchfield had a big hole to run through created by the offensive line. Then once he got into the second tier of the defense, he lowered his shoulder and down went two Hazard defenders. Birchfield stayed on his feet and hit a video-game like turbo boost and then, three Bulldog defenders tried to bring him down, but his feet kept churning, until he was all alone running into the end zone. It was a highlight reel run for Birchfield to help put the game away.

How Motivated is Aaron Rodgers to Snap 0-3 Playoff Record Against San Francisco?

NFL Divisional Round Preview: Expect a Dog Fight in Packers Vs. 49ers?

Birchfield led the way for the Panthers as he racked up 193 yards and two TDs on 30 carries.

Hazard drove down the field one last time into Pikeville territory. On fourth down, Hazard quarterback Max Pelfrey’s throw sailed out of bounds in the corner of the end zone giving Pikeville the win and the No. 1 seed heading into the Class A playoffs.

Pikeville quarterback Isaac McNamee was seven for 13 passing for 77 yards.

Pikeville’s defense held Hazard to 148 total yards of offense. The Bulldogs only rushed for six yards on the night.

Freshman quarterback Max Pelfrey led the way for the Bulldogs going 14 for 26 passing for 142 yards with two interceptions.

The Panthers held Max Johnson to just one 14-yard catch on the night. Johnson wasn’t credited with any carries.

Hazard (6-4) is scheduled to host Shelby Valley in the regular season finale Friday night at 7:30 p.m.