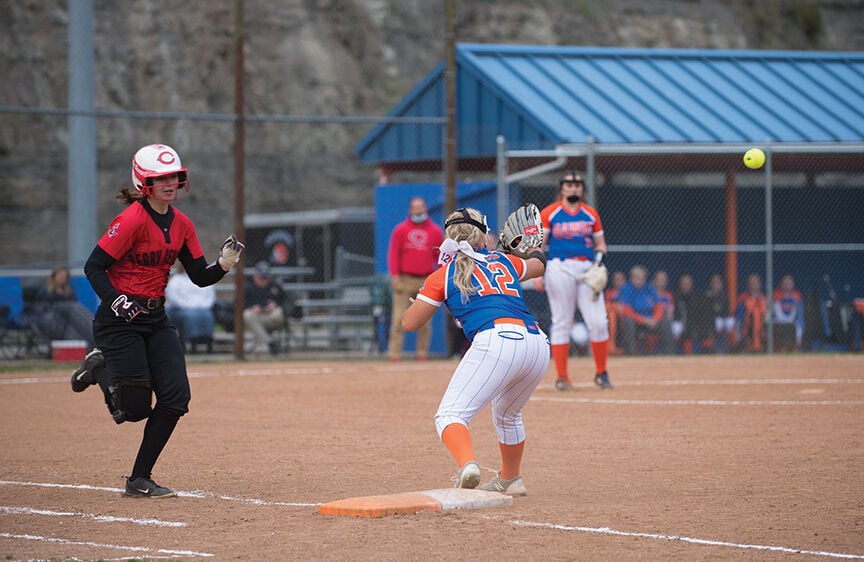 Perry Central’s Alyssa Dixon hustles down the first-base line last Thursday as Pike Central first baseman Dailey Damron waits to field the ball. Dixon was safe on the play with an infield hit. 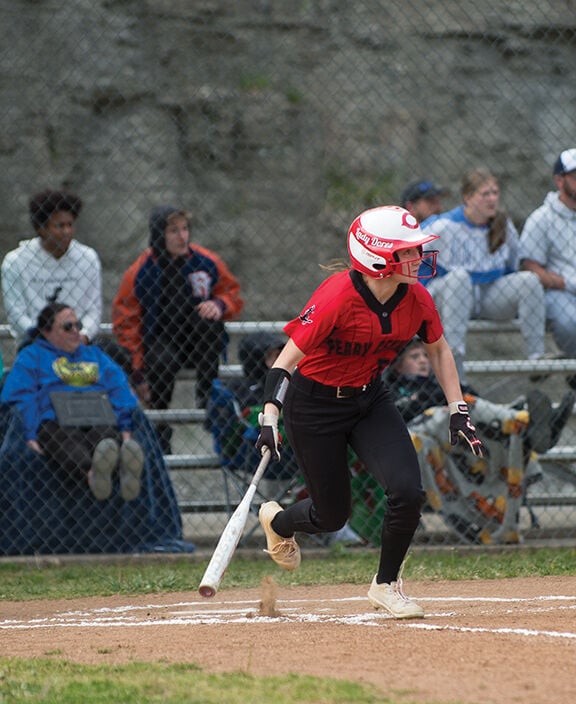 Perry Central leadoff batter Kailey Dixon watches the ball sail out of the park last Thursday against Pike Central. Dixon hit a leadoff home run on the play. Perry Central rolled to a 16-3 win over the Lady Hawks.

From the first at-bat to the last, Perry Central was putting pressure on Pike Central’s defense.

Eventually, the pressure got to be too much as the Lady Commodores rolled to a 16-3 win in six innings over the Lady Hawks Friday night.

Kailey Dixon started the game off with a bang. Kailey Dixon hit a leadoff solo home run to give Perry Central an early 1-0 lead.

Rachel Feltner followed by being hit-by-a-pitch.

With two outs, Perry Central’s Rani McIntyre walked to put two runners on. Lauren Morris followed with an RBI single as the Lady Commodores jumped out to a 2-0 lead.

Pike Central answered in the bottom of the first inning. With two outs, Sydnee Lowe singled to get the Lady Hawks going. Livia Sanders followed with a single. Makenna Adkins followed with an RBI single to cut the lead to 2-1. The second run of the inning scored on a wild pitch.

Perry Central got going again in the top of the third inning. Kim Hughes drew a leadoff walk to start the top of the third. Courtesy runner Sierra Pratt stole second base. With a runner in scoring position, Crystiana Couch hit an RBI single to push the lead to 3-2.

With two outs in the top of the third, Emma Pigman hit an RBI single to push the lead to 4-2.

Pike Central got a run back in the bottom of the third inning. Emalie Tackett hit a shot to centerfield and reached on an error. Lowe followed with an RBI double to to cut the lead to 4-3.

The Lady Commodores kept the pressure on offensively in the top of the fourth inning.

Hughes reached on an error.

Steven M. Sipple: Held's group enjoys late burst in spring drills; and a tip of the cap to Davison

Nobody has higher expectations for Wyoming's Treyton Welch than himself

Wyoming picks up commitment from California defensive back

That set up Couch. Couch crushed a two-run home run to push the lead to 6-3.

After that Hughes settled in on the mound. Hughes picked up the win as she went all six innings and gave up three runs on five hits, while striking out eight without walking any.

Perry Central kept things going in the top of the fifth inning. Pigman hit a leadoff single. Ashlyn Dixon reached on an error, but drove Pigman home to push the lead to 7-3.

With one out in the top of the sixth, Pigman hit a triple to get the Lady Commodores going. Alyssa Dixon followed with a bunt RBI single to push the lead to 11-3. Rylie Feltner followed by getting hit-by-a-pitch.

Kailey Dixon followed with an RBI triple in the gap to push the lead to 13-3.

Rachel Feltner was hit-by-a-pitch to put runners on the corners.

Hughes followed with an RBI single as the lead grew to 14-3.

With the bases loaded, McIntyre reached on an error as two more runs scored.

Pike Central couldn’t get any runs back in the bottom of the sixth inning as the game came to a close.