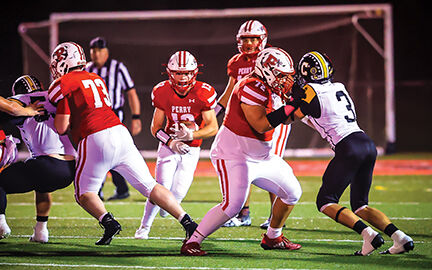 Perry Central’s Cade Miller runs with the ball last week against Johnson Central. The Commodores fell 41-0 to the Golden Eagles in Class 4A District 8 action.

HAZARD — Perry Central limited perennial state title contender Johnson Central to one TD through two quarters but faltered after halftime as the Golden Eagles quickly separated themselves and pulled away to win 41-0 in a Class 4A, District 8 game on Friday, Oct. 8.

The loss forced Perry Central to drop to 4-3 overall and 0-2 in Class 4A District 8.

After taking a 7-0 lead into halftime, Johnson Central recovered a forced fumble on the opening kickoff of the second half and gradually pulled away to defeat the Commodores.

Perry Central finished with 149 yards. The Commodores rushed 31 times for 84 yards in the setback.

Quarterback Chanse McKenzie led the Commodores. Through the air, McKenzie completed eight of 16 passes for 65 yards. On the ground, McKenzie rushed 16 times for 49 yards.

Perry Central is scheduled to host Clay County for a Class 4A, District 8 game on Friday, Oct. 15. The Commodores are set to welcome in the Tigers for Homecoming.