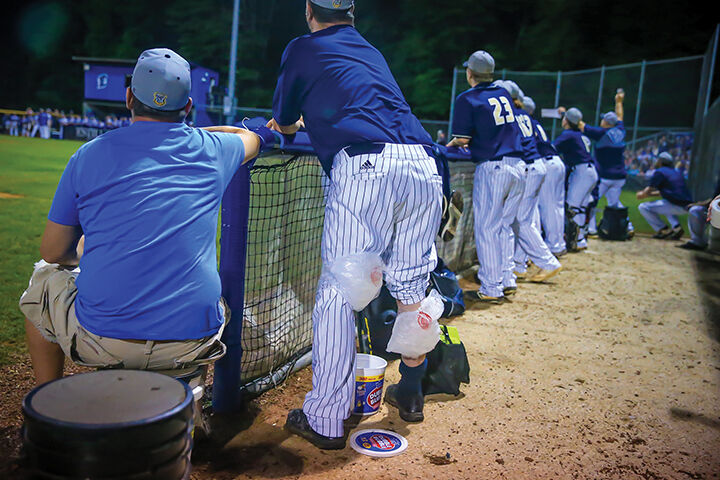 Hazard coach John Meehan has ice wrapped around his legs in the 14th Region championship against Estill County. 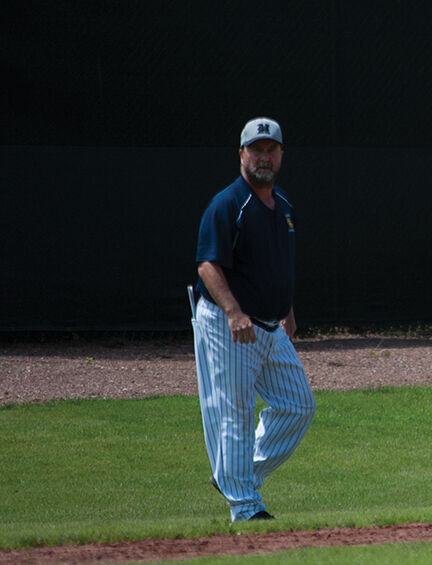 As everyone knows, there was no 2020 season.

COVID-19 shut down everything.

It was a tough year.

It was tough on Hazard coach John Meehan as well.

Meehan had his own personal health problems and was forced to be away from the team even before COVID-19 shut down everything.

“I was going through a little bit of health issues last year myself and I wasn’t with them at all,” Meehan said. “The good Lord has blessed me with being able to get back out on the field and doing something that I love. Just being around these boys and enjoying the games and the bus rides home —that’s what makes me feel better. I wish you could ride the bus ride home with us tonight because it’s special.”

But Meehan is resilient.

And this season, nothing was keeping him from his team.

His team has taken on that resiliency and time and time again, the Bulldogs keep fighting and scratching and clawing out wins.

In the 14th Region semifinals, the Bulldogs were down against Knott Central.

Hazard rallied and pulled out a 7-3 win. In the 14th Region championship, Hazard was down to its last out before rallying to pull out a 7-6 win over Estill County.

Meehan injured his leg during the 14th Region championship against Estill County and had ice wrapped around his leg while he was coaching.

He was still limping and not moving around great on Saturday — but he didn’t stop coaching and his team didn’t quit on him.

Last Saturday, the Bulldogs were down 2-0 in the top of the seventh with only two outs left — before you guessed it — the Bulldogs rallied to pull out a 3-2 win over Johnson Central in the Semi-State 8 to advance to the Elite 8 round of the KHSAA State Baseball Tournament.

Steven M. Sipple: Martinez's 'nothing to lose' mentality may lead to heck of a comeback story

“We just reflected back to the semifinals against Knott County,” Meehan said. “The same kid (Hank Pelfrey) who hit the swinging bunt, he does the same slide at first to get there. When he does that, we’re running on two outs and were one strike away from being out and done for the season, then we score two runs, so we’ve been through it. We also scored the go-ahead run against Estill County in the championship after being down the whole game, so this is nothing new. These guys never quit. We try to pep them up, but we don’t have to do it with this bunch. We’ve got a bunch of rag-tag kids who love each other and I mean they love each other for sure and they have each others backs and you just saw it here.

“We got the squeeze against Estill County to tie it in the sixth or seventh inning, but we work on bunting every single day. These guys are fundamentally sound and I trust each and every one of them one through nine to be able to put the bunt down when the time comes. When they know it’s coming and everybody else knows it’s coming, it’s hard to do that.”

With missing all of that time last season, Hazard was behind.

The Bulldogs had a lot of learning and catching up to do.

Early in the season, the Bulldogs played like they had missed a whole season.

But as the season progressed, so too did the Bulldogs.

“It’s funny because Shawn (Hall) and I were talking about a month ago and nobody was there and we were talking about how COVID-19 hurt our programs,” Meehan said. “I’ve got four transfers in from other schools, so I’ve never worked with them or they’ve not been used to or program. The core of our team was in eighth-grade last year, so they had never come through our program either and worked with us on fundamentals. I’m telling you, you can miss a year of football and you can exert your will and basketball, you tend not to lose your skills there, but with baseball, I literally can’t give them more than a day off without them going backwards. So early in the year, we started out slow and I’d go home and beat my head on the walls because I couldn’t get through to them. Their physical mistakes were because of their mental mistakes. That’s what COVID-19 did to us. This was our 43rd game and throughout everything, people would say, ‘What are you going to do?’ We have to play ballgames. Once we hit No. 40, they’ve seen it all until today and then we saw a little more, but I love this team. I will say this, I’ve had some great teams throughout the years, but this is the most improved team I’ve ever coached in my life.”

Thursday night, the Bulldogs will have their toughest game of the season.

Hazard will take on Louisville Trinity at 8:30 p.m. at Whitaker Bank Park in the Elite 8 round of the state tournament.

“They already know that if they won today that they would play the winner of the 6th or 7h Region,” Meehan said. “We’ll go down there and play them. They put their shoes on the same way we do. It’s going to be a monumental climb for us, but the experience of my program and to keep playing, that’s what the team gains. We’re continuing playing and that’s what this program needs.”

Trinity is the top ranked team in the state and only has two losses on its resume this season.

Hazard knows its back is against the wall, but don’t think that this group will cower in fear.

Just like coach Meehan and his squad have done all year.