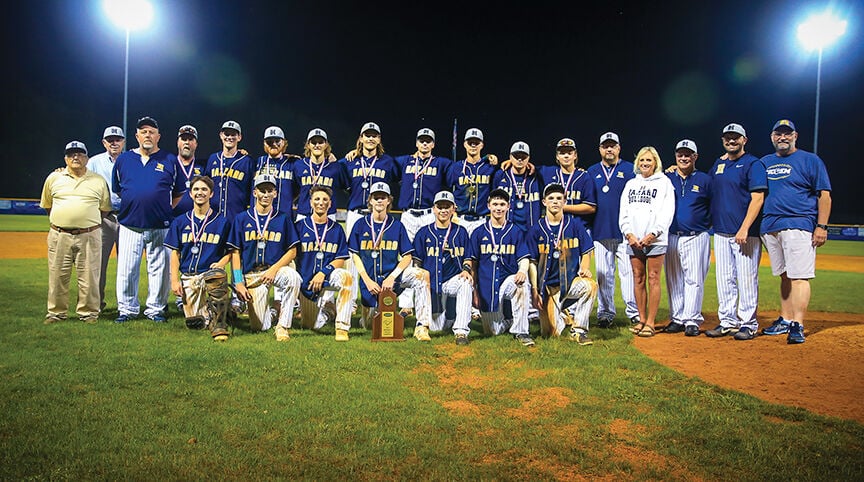 The Hazard Bulldogs pose with the 14th Region trophy after the Bulldogs picked up a 7-6 win over tournament host Estill County Tuesday night. The Bulldogs will travel to Morehead State University to take on Johnson Central in the Semi-State 8 Saturday at 1:00 p.m. 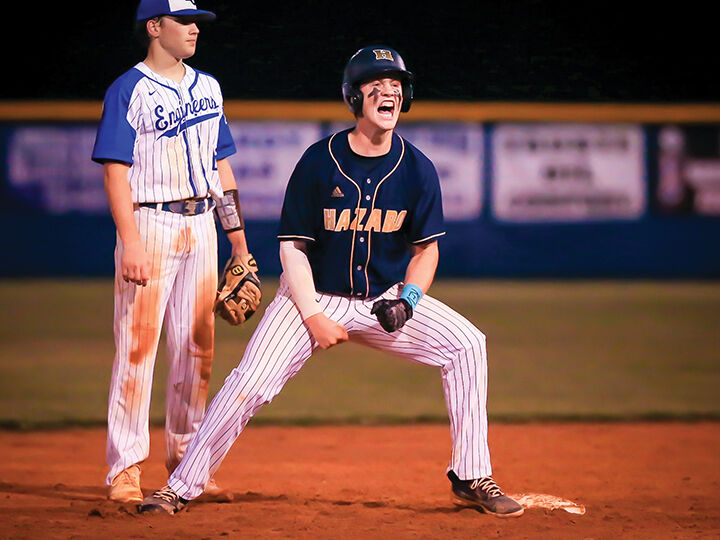 Hazard’s Dawson Duff celebrates on second base Tuesday night during the 14th Region championship at Estill County. The Bulldogs pulled out a 7-6 win for their fifth straight region championship. Hazard will advance to take on 15th Region winner Johnson Central in the Semi-State 8 at Morehead State University this Saturday at 1:00 p.m. The winner will advance to the final eight of next week’s Sweet 16 Baseball State Tournament at Whitaker Bank Park in Lexington.

Determined Hazard scored four runs over its final four at-bats to battle back from behind to beat Estill County.

Starting strong, Estill County led 6-3 at the conclusion of the second inning.

Gus Mullins earned the win on the mound for the John Meehan-coached Bulldogs. Mullins pitched three and 2/3 innings, allowing one hit and zero runs while striking out five and walking one.

Contributing on the hill for Hazard, Garrett Miller threw two and 1/3 innings in relief.

Thomas Forehand took the pitching loss for the Engineers. Forehand pitched five and 1/3 innings, allowing four runs on four hits while striking out eight and walking one.

Jarrett Napier started the game on the mound for the Bulldogs. Napier allowed four runs on two hits over one inning, striking out one and walking one.

Rocky Hix started the game on the mound for the Engineers. Hix pitched one and 2/3 innings, allowing three runs on three hits while striking out one and walking one.

Mullins and Samuel Shoptaw paced Hazard at the plate, providing two hits apiece for the Bulldogs.

Hazard (29-12) is scheduled to face 15th Region champion Johnson Central in the Semi-State 8 game at 1:00 p.m. at Morehead State University on Saturday, June 12.

Hazard erupted for a half-dozen runs during its final at-bat to knock off Knott Central 7-3 in the semifinals of the 14th Region Baseball Tournament at Estill County High School on Monday, June 7.

Knott Central led 3-0 at the conclusion of the fifth inning but the Bulldogs battled back.

Facing a two-run deficit, Hazard crossed home plate six times during the top half of the seventh inning to move ahead of familiar foe Knott Central.

The Bulldogs edged Knott Central 4-3 in the hits column.

Here's why it's highly unlikely Badgers, other NCAA athletes will cash in quickly on Supreme Court's ruling

Sawyer Patrick picked up the win on the mound for the Bulldogs. Patrick pitched a complete game, allowing three runs on three hits while recording eight strikeouts over seven innings.

Patrick, Hank Pelfrey, Gus Mullins and Garrett Miller each delivered one hit for the Bulldogs in come-from-behind win. Pelfrey drove in two of Hazard’s seven runs.

Caleb Justice went two for three at the plate to lead Knott Central’s offensive effort. Justice doubled for the Patriots in the short effort.

Pulling away to win convincingly, Hazard defeated Wolfe County 11-1 in five innings in the opening round of the 14th Region Baseball Tournament at Estill County High School on Saturday, June 5.

After notching the win, Hazard advanced to the semifinals of the 14th Region Baseball Tournament.

Matt Craft earned the win on the mound for the Bulldogs. Craft pitched one and 2/3 innings, allowing one run on two hits while striking out three.

Gus Mullins, Garrett Miller and Max Johnson each put in work in relief on the mound for Hazard in the victory.

Contributing on the mound, Kris Evans and Andrew Mayabb pitched in relief for Wolfe County, throwing two and 1/3 innings and one inning, respectively.